McLeay Reserve in Mellons Bay – which was first tended to in the 1970s by residents Doug and Elena McLeay – is to get some additional love and attention in the coming weeks.

Several members of the McLeay Family have indicated they will attend a working bee in the McLeay Reserve on Saturday, December 5.

They will meet by the Montressor Place bridge at 9am and finish the working bee by noon.

MacLeay Reserve Group founder Alison Andersen said the present committee wants to reflect on the McLeay’s legacy as well as raise awareness of the group’s activities in the reserve and on the adjacent MacDonald Walkway.

“Hopefully a few of your readers (will) volunteer to contribute their time and energy to the project,” Andersen said.

“The working bees are held on the first Saturday of each month from 9am until noon at the latest and at arranged times during the week.”

The McLeay Reserve is a 2ha natural heritage reserve in the stream gully, bordered by residential housing which runs from Bleakhouse Road to the MacDonald Walkway, a riparian corridor which leads to Mellons Bay Beach. The Reserve has access points from Upper and Lower Haseler Crescent and from Montressor  Place, with public walking tracks through the reserve.

The reserve has a relatively low priority for council conservation management, hence the opportunity for the Mellons Bay and wider community to get involved in a local ecological restoration project. Key management priorities include pest plant management, pest animal control, restoration planting and regeneration of the riparian margin to protect the aquatic habitat.

“The remnants of the natural coastal broadleaf forest was supplemented by the extensive clearing and planting Eleanor and Doug McLeay did in the 1980s supported by the Manukau City Council and the Cornwall Trust,” said Andersen.

“The area was then gifted to the Crown by Neil Housing when the subdivision at the end of Haseler Crescent proceeded. Tracks, stairs and a boardwalk were then built by Manukau City Council in the reserve.

“A later community project, building steps into the reserve from Montressor Place, provided further accessibility. In 2013 the MacDonald farm, adjacent to Mellons Bay School, was opened up for subdivision and the riparian corridor, a concrete path leading from Mellons Bay Beach to the McLeay Reserve, was formed.”

Large duck ponds were excavated to catch sediment before it reached the beach and many trees were planted, she said.

“However by 2019 a number of Mellons Bay residents had become concerned about the prolific spread of noxious weeds and the proliferation of pest animals, notably rats, in the Reserve and on the Walkway and as a result the McLeay and the MacDonald Ecological Groups were formed.

“Supported by Auckland Council, volunteers have begun the huge job of clearing the area of noxious weeds, monitoring rat bait stations and clearing the stream to improve water quality and flow.” 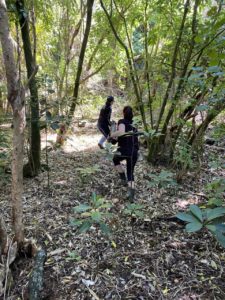 As well, the 800 plants which the Auckland Council provided were planted in winter.

Due to these projects, a diverse range of native plants can be found and enjoyed in the Reserve and on the walkway today.