Progress to build stage 1 of the Eastern Busway is within budget and on schedule for completion in 2021. Work to build the new busway bridge reached a major milestone recently with the delivery of the beams that will span the length of the bridge.

Two beams are currently on-site, delivered independently by road from Whangarei. The delivery by truck was the largest ever single haul delivered from Northland.

These are the largest single steel beams ever to be fabricated in NZ.

The rollers required for the bridge to be launched into place are manufactured in Germany and weigh 6 tonnes each. There are currently 2 rollers on-site with 2 more to be delivered next week

The steel for the beams is manufactured in Korea, laboratory tested in both Korea and on arrival in New Zealand. The steel plate is cut and beams fabricated, painted and transported by Culham Engineering in Whangarei. 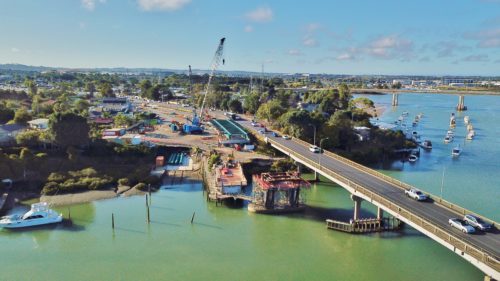 There are three main beams; The river edge beams are 66.5m each and the middle beam is 73.5 m.

Each beam weighs more than 100 tonne

Two piers are under constructed in the estuary. Each pier encompasses 8 foundation piles to hold the bridge. Each pile is 360 cubic meters of concrete poured in a single placement. The piers are formed by constructing a temporary steel boat weighing 75 Tonnes which is floated into position and lowered to bed of the estuary.

Each pier has 2 columns constructed on top, each 7 m in height.

Other key recent milestones in the project include the new layout of Panmure Roundabout into an intersection and laying the first concrete along sections of the new busway.