By Kelly Teed, Therese Henkin
The cleanup is continuing in east Auckland after last week’s stormy weather battered the region.

Half Moon Bay boat ramp was severely damaged in the storm — video showed the pontoons ripped apart in the force of the tide, while the popular Maraetai Wharf was also badly damaged and is temporarily shut for repair.

Much of Auckland was left without power at various points throughout the day as the storm raged.

Beachfront residents and businesses suffered various levels of flooding as the tide washed much debris on to shore.

Staff at Maraetai Wharf Cafe were working hard on Tuesday to get the business fully operational after sustaining substantial flooding.

Duty manager Saiful Hasan said sea water – which was ankle deep inside — damaged the three food cabinets and the dishwasher. An outdoor water pump has also been rendered inoperable. The roof and a wall also sustained damage.

The dishwasher is working again but isn’t expected to last more than a couple of weeks while one cabinet is still not working. All ice cream and food perished as power had to be switched off. 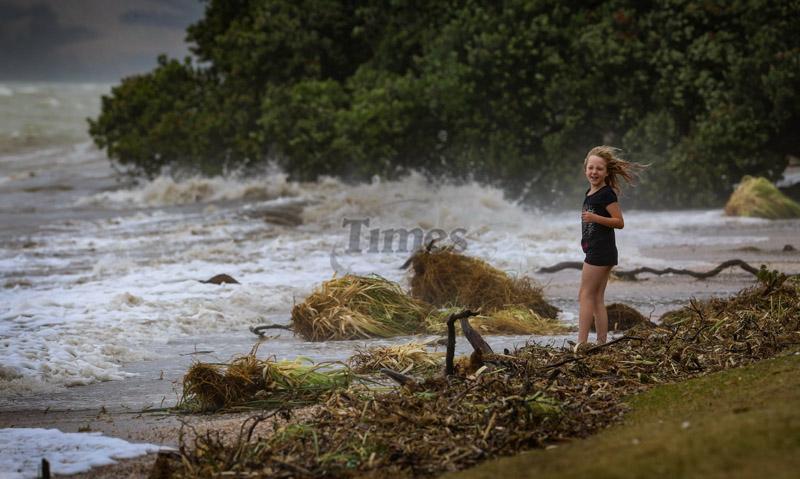 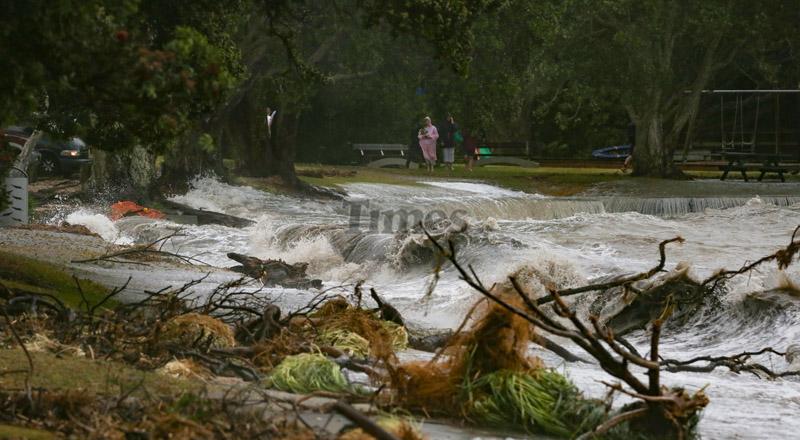 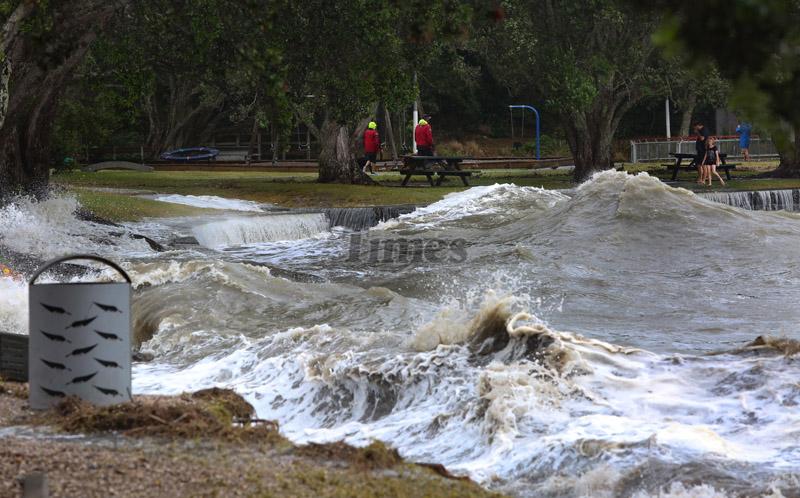 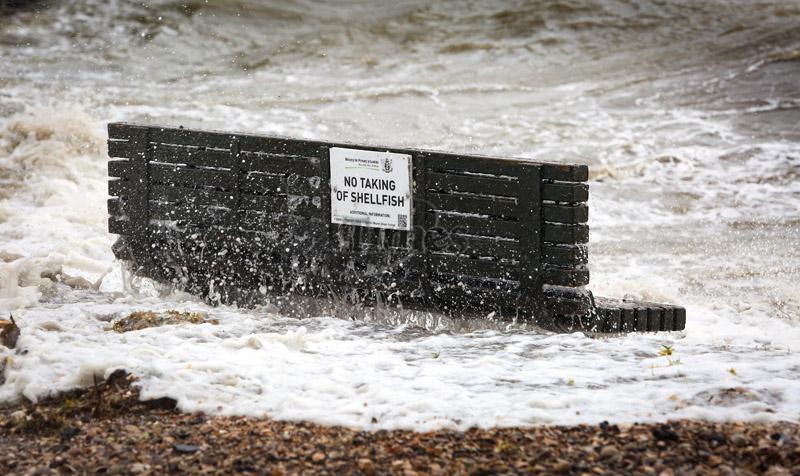 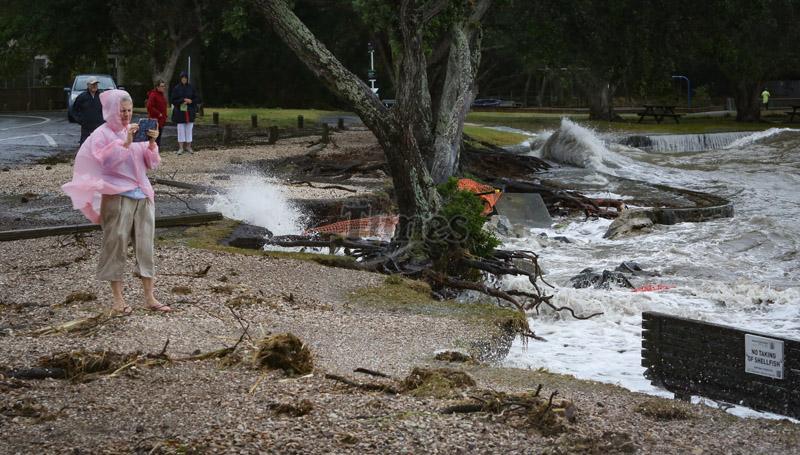 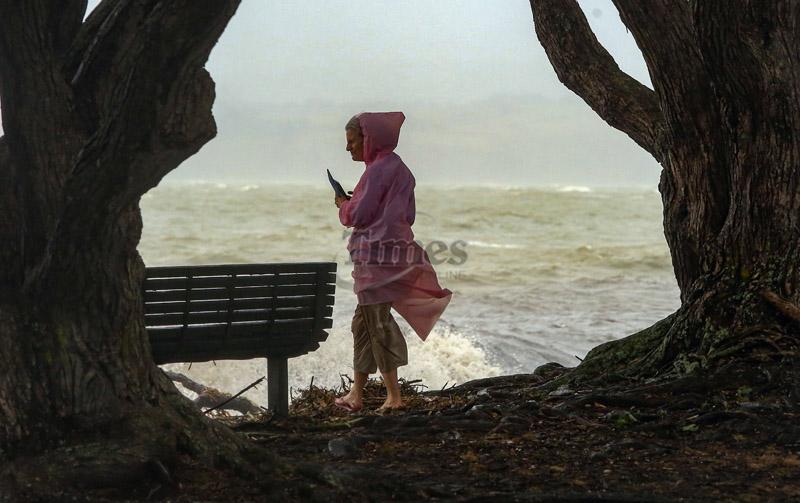 Hasan said they are selling coffee and simple food and the business is hopeful to be fully operational soon.

Manager of Tides Kitchen in Bucklands Beach, Aman Kohli, said they experienced a power cut but were otherwise lucky with approximately 5cm of flooding.

“I think these types of storms are going to happen more frequently in years to come, and we need to look at future proofing a lot of this, particularly those areas where the erosion has occurred,” he says.

Tresadern says the club was fortunate and most of the damage was superficial, with the seawall taking the brunt of the impact.

“We are lucky that the storm happened during the day, because we had members down there re-tying mooring lines that had snapped and things like that.

“Most of our damage was on our loading berth, which took quite a bit of impact and they will probably have to replace one of the floating pontoons.”

Tresadern says specialist marina repairmen have done superficial fixes to the BBYC jetty to make it useable, but the focus at the moment is getting Auckland Council’s boat ramp up and running again. He says the next few weeks will be focussed on repairing the damage, with engineers coming in to assess structural damage.

“Quite a lot of our repairs are just a matter of tightening and replacing bolts, but there are a few piles that have been knocked out on the seawall which will have to be strengthened.

He says the priority after the repairs should be to think about how to protect the marina in the future.

“Making the seawall higher is definitely something to think about.

“Also, with a northerly, our entrance is exposed so maybe it’s worth looking at a wave break a bit further out which would stop the impact of the tides through that entrance.”

Howick Sailing Club reportedly lost an inflatable boat which was used for their sailing programmes. One of the club house walls was also reportedly destroyed.

Auckland Council head of operational management & maintenance Agnes McCormack said a total assessment of coastal damage was yet to be completed due to the vast amount of area needing to be inspected but was expected to be close to finished by the end of next week.

McCormack said assets which have not had their structural integrity compromised, such as fences, will be “relatively straightforward to fix.”

“However, for more complex damage that requires specialist assessment, we need to ensure that the structures are safe and will be engaging engineers next week where required.

“Damage to seawalls and wharves could take months to repair. At this stage, Maraetai Wharf has been closed, as well as the pontoons at Okahu Bay and Half Moon Bay. The erosion of some beaches will be left, with an expectation that natural coastal processes will remediate the damage caused to sanded areas. Swimming pontoons will be inspected by our contractors for damage and to ensure they are secure and safe for swimming.”