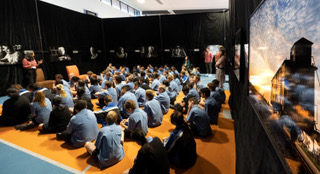 To this day, Robert “Bob” Narev questions why he was not sent to concentration and extermination camp Auschwitz.

More than 1.1 million men, women and children lost their lives there.

When addressing the audience of more than 300 people, Bob began by stating his speech was called “Destiny for Auschwitz”.

“I was born in central Germany,” Bob said, “in August 1935. My father, Erich, was a schoolteacher and my mother, Gertrud, an opera singer.”

In Frankfurt 1942, Bob was taken to Theresienstadt – a concentration camp in Czechoslovakia. He spent more than two years there.

“It was a transit camp,” he said. “Friendships were short-lived because there were so many people coming and leaving.”

Bob’s grandmothers died and his father passed away in surgery. Post-war, Bob and his mother immigrated to New Zealand.

“I wondered,” Bob said, “why I was never taken to Auschwitz. Maybe it was because of my mother, or my father’s war medals, but my destiny was not for Auschwitz.”

These horrors were echoed by fellow Holocaust survivors.

Kitia Altman, a survivor, called the Holocaust “an elaborate system of dehumanisation”.

In her testimonial, she said, “things changed so violently when we entered Auschwitz.”

“One day,” Zelig Berkhut, a Holocaust survivor, said in a testimonial video, “a group of Jews were gunned down. Several days later I saw the ground moving. They were suffocating.”

On Thursday April 8, the Holocaust and Anti-Semitism Foundation held speeches, testimonials and an exhibit at Elim Christian College Golflands campus.

Sheree and Perry Trotter, the co-founders of the Foundation, started interviewing holocaust survivors 13 years ago. They have interviewed 70 survivors.

“We are passionate about recording and interviewing Holocaust survivors,” Sheree said, “so their stories are kept alive.”

Ran Yaakoby, the Ambassador of Israel in New Zealand and one of the speakers, said this awful past must be remembered. “We make sure these experiences of loss and survival are never forgotten.”

Not only was the event about making sure the memories and the survivors are not forgotten, but it is to raise awareness of the Holocaust as 30 per cent of New Zealanders have admitted to knowing very little of this act of genocide, the systematic, state-sponsored persecution and murder of six million Jews by the Nazi regime.

“It is important to continue to educate people on the Holocaust,” Bob said, “to tell those who are willing to listen.”

The Auschwitz Now exhibition was opened for the audience in the evening.

“It’s important to keep the issue before the public,” Sheree said. “The exhibit is a great way to do this”.

Within the exhibit are black-and-white photos of the Holocaust survivors the Trotters have interviewed. Additionally, there are pictures of important pieces of concentration camps – the gas chambers, the prison guard posts, bunkrooms, the living conditions with informational pieces below them.

It is another stark reminder of what was inflicted on the survivors.

Mandy Heim, an Elim Christian College teacher who was pivotal in setting up the event, mentioned that delving deeper into the Holocaust will “honour New Zealand youths that can become ignorant.”