A number of projects and places could benefit from this funding, which is part of NZTA’s Innovating Streets for People pilot.

Mayor Phil Goff says he welcomes the government’s commitment of additional funding for walkways and cycleways.

“We’ll be seeking further information from the government as to the details of the programme, but it could help with the development of widened footpaths and new cycleways in areas including the city centre and south Auckland where programmes are already under way.

“In the past two weeks we’ve seen a surge of individuals and families in their bubbles heading outdoors and making the most of the walking and cycling in their neighbourhoods, with some locations seeing a 100% increase in use compared to the same period last year.

“This is a good opportunity to deliver more active transport infrastructure for recreation, to support physical and mental health and to ensure appropriate social distancing on cycleways and footpaths as we move out of the lock-down phase.

“It will also help to future-proof our active transport network of cycleways, shared paths and footpaths, meaning that as the restrictions eventually lift, more people will have an alternative, healthy means to get around the city without adding to traffic congestion and carbon emissions.” 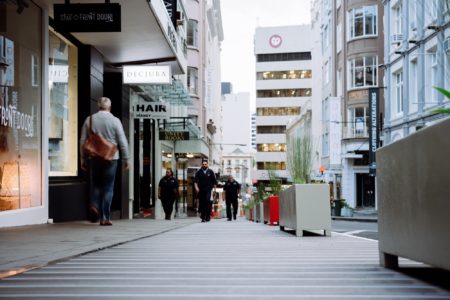 “Additional funding would enable us to quickly widen more footpaths in busy areas and deliver more separated cycleways so people can enjoy their streets and keep a physical distance at the same time.”

The funding could speed up the delivery of major projects like Access for Everyone in the city centre and the Safe and Healthy Streets programme in south Auckland.

“We are seeing more and more people walking and cycling in the local neighbourhoods during the lockdown because the roads are quiet and safe,” he says.

“We want this to continue after the lockdown and delivering quick, low cost footpath widening and temporary cycle lanes will give people more transport choice.

“AT will be applying for funding for several projects that we can get underway shortly after the lockdown ends.”