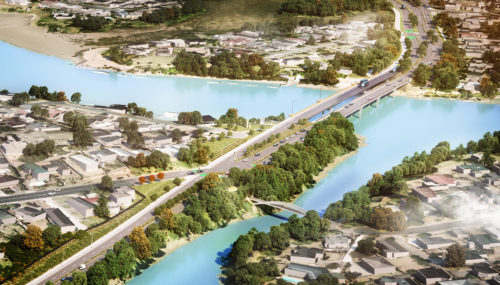 The contract for the next $100million construction stage of the Eastern Busway has officially been signed.

Today Transport Minister Phil Twyford and Auckland Mayor Phil Goff joined Auckland Transport officials to sign the contract for the next stage of the project, which is a designated busway that will run between Panmure and Pakuranga.

Auckland Mayor Phil Goff says, “For too long we have underinvested in public transport for East Auckland. As the area has grown, the roads have become more congested without suitable alternative transport options.

“The $1.4 billion being invested in the Eastern Busway from Panmure to Botany helps rectify this. It will be transformational for the area.

“Using the busway and the new Panmure rail station, commuters will be able to travel from Botany to Britomart in less than 40 minutes cutting travel time by more than a third. More people on public transport means fewer people in cars and less congestion.

“The Eastern Busway is the second biggest transport infrastructure project after the City Rail Link.

“The first section from Panmure to Pakuranga represents $275 million in spending with around $700 million of the total project cost funded from the Regional Fuel Tax which has enabled construction to be brought forward,” said Phil Goff.

The Eastern Busway consists of several major pieces of infrastructure, including completing the urban busway between Panmure and Botany; associated key stations at Pakuranga and Botany; the Reeves Road flyover at Pakuranga town centre; and new/improved pedestrian and cycle facilities.

A reduction in journey times and better accessibility to other parts of Auckland will improve the range of employment and leisure options for South-East Aucklanders.

These factors were included as part of a report showing that AMETI Eastern Busway will generate around $680M of additional GDP over a 40-year period.

Transport Minister Phil Twyford said “This project is a great example of central and local government working together through the 10-year Auckland Transport Alignment Project to unlock Auckland’s potential. The contract being awarded means we are another step closer to having a congestion-free network.”

Fulton Hogan, the New Zealand owned construction company, have been awarded the contract. They have also recently been involved in other major infrastructure projects including Auckland Northern Corridor and SH16 Causeway upgrade.

Physical construction begins on-site in April and will  take approximately two years. Parts of Lagoon Drive and Pakuranga Road will be widened to create a dedicated, congestion-free busway, similar to the hugely popular Northern Busway on the North Shore.

Panmure Roundabout will be turned into a safer signalised intersection, there will be new cycle and walking paths, improved public spaces and reserves, a second bridge across Tamaki River and several intersection upgrades.

Auckland Transport Chief Executive Shane Ellison says, “This is Auckland Transport’s largest infrastructure contract and the announcement results from a rigorous process that involved a number of extremely well-qualified companies.

It has been an important part of our approach to apply socially responsible guidelines so we can ensure positive community results that cover areas beyond transport, including employment, waste management and youth training.”

AT has also been working closely with Mana Whenua to recognise the cultural significance of the area through design new public spaces, reserves, enhanced streetscapes, landscaping and Mahi Toi (art works) along the project route.

Graeme Johnson, CEO NZ, Fulton Hogan says, “We’re proud to have been awarded the contract to deliver the AMETI Eastern Busway from Panmure to Pakuranga on behalf of Auckland Transport.

Fulton Hogan is a New Zealand owned business, employing more than a thousand staff in the Auckland region.

This is a major route upgrade for Auckland and our team bring the experience required to deliver this project successfully in a challenging and busy network environment, with a key focus on the health and safety of both the public and our team.”