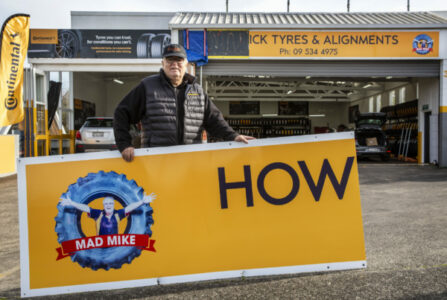 A truck has split a local shop into two – losing the ‘How’ in Howick Tyres.

One month ago, a truck that was too-high struck the top of Howick Tyres & Alignments building, damaging the garage door and forcing the first half of the sign above to be taken down, the shop’s owner Mike Johnson, or Mad Mike, says.

“We only took the sign down last week. They had to look inside. Hopefully it’ll be fixed in the next couple months.”