East Auckland is to get four more red-light safety cameras.

These new red-light safety cameras will reduce dangerous driving and help save lives.

In Auckland, between 2014 and 2018, there were 83 fatalities or serious injuries due to red-light running.

Auckland Mayor Phil Goff says the growth in deaths and serious injuries on Auckland roads is unacceptable. It is up 75% from 2014 – 2017 and several times higher than the rate in other New Zealand cities.

“We need to enforce road safety, and last year when we increased enforcement on red-light running through safety cameras, we made real progress.

“We are trying to stop people behaving dangerously, not to raise revenue, and that’s why we’re advertising where the red-light cameras are,” the Mayor says. 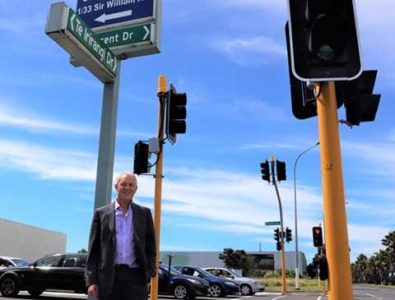 Executive General Manager of Service Delivery, Andrew Allen says red-light cameras help to make Auckland’s roads safer.
“Some drivers think red lights don’t matter and treat them like a challenge. That’s blatantly wrong and puts drivers, passengers, pedestrians and people on bikes at risk of being seriously injured or killed.
“Auckland Transport is committed to making our roads safer for all of us and we are working with the police to do this.”

Superintendent Naila Hassan, Waitemata District Commander, says New Zealand Police officers work hard every day to keep people safe on the road, and these cameras will support that work.
“While these cameras are a great step to ensuring people are compiling with basic road rules, I want to remind people that road safety is up to everybody, it’s not all about enforcement. It’s about making the choice as a responsible driver or rider to put safety first. That means stopping for red lights, it means putting on your seatbelt, never driving impaired, and always keeping to the speed limit and driving to the conditions.”

AT owns, installs, and maintains the red-light safety cameras. NZ Police works in partnerships with AT and has responsibility for enforcement. Money from infringements goes to the Government’s consolidated fund.

The new camera are at the following eastern locations:

Rotary: Rallying around to make a difference

Coronavirus: Not a single face mask available at local pharmacies

Bumps in the night: Local paranormal investigator on the case