Director of Rugby, Pita Alatini, said the game was “ Another good step up from last weeks game vs Otahuhu. The boys scored some great team tries. Our Forwards creating some good front foot ball for the backs to finish out wide. Still a few things to work on especially leading into this week against the defending champions Ponsonby. It will be a great measure stick of where our Prems and PDs (development side) are at after this weekend.” 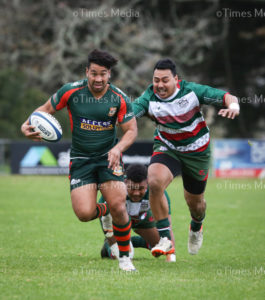 In school rugby, Macleans  put in a solid shift to take down Botany Downs SC 23-11

Pakuranga edged a close one 25-21 over Avondale

Edgewater was just tipped by Alfriston 14-12, while

St Kents powered to a 36-5 drubbing of Tangaroa College in the 1A competition.

A dominant first half set Otahuhu up for a big win over defending premiers Howick. The Leopards led 22-0 at the break and then went on with the match, with the game management of half Willie Stowers and energy of young dummy-half Taniela Otukolo being key features of the win.

Tamore Nati crossed twice for Manukau as they got past Pakuranga in a battle of two round-one winners at Moyle Park. Scores were locked at 4-4 at the break, but the Magpies were too strong in the second 40.