While on the face of it a further 4500 veterans have been issued with the “Operational Service Medal” however, being one of the recipients, that’s all it was. 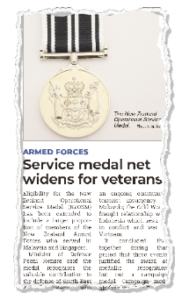 This battle of recognition for some of us has been going for close to two decades for service that occurred, in my case, over half a century ago.

Veterans were very disappointed that “Qualifying Operating Service” was not granted at the same which would have allowed financial support from Veterans Affairs, Veterans Pension, Veterans Super Gold Card and being buried alongside my mates at a military Cemetery.

These veterans know they deserve this further recognition and intend through Veterans Associations to carry on forcing the Government’s attention.

This service was not just in Malaysia and Singapore, it was in the wider British Commonwealth Far East Strategic Reserve as a deterrence to any wider aggression from the Peoples Republic of China.

Being in the Royal New Zealand Navy, our ships were on patrol in the South East Asia theatre of operations and most of these deployments lasted 9/10 months on station