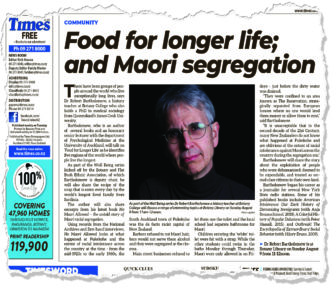 I read with interest (Times, July 28) Robert Bartholomew’s claims that Pukekohe was a hotbed of racism and typical of New Zealand during the period 1920s to 1960s.

I grew up in the Patumahoe-Pukekohe area during the 1950s and 1960s. My parents lived there for most of their lives. Bartholomew refers to barbers (plural) and bars (plural) refusing service to Maori and to segregation at the cinema.

There is an element of truth in these assertions but Bartholomew must guard against moving from the particular to the general. To suggest that these were in any way common in NZ, and even typical of Pukekohe, is quite wrong.

Where Pukekohe was different from most of the country was in the work available to many Maori and its effect on their living conditions. Pukekohe was/is the major supplier of vegetables to Auckland.

Market gardening is seasonal and many Maori came from North Waikato towns of Rangiriri, Huntly and Ngaruawahia to stay a few months at a time. Growers were not obliged to supply standard accommodation and Maori garden workers often accepted substandard housing as a result. Many of their temporary homes were little better than shacks with a cold water tap at the door.

Consequently, some townspeople queried the state of cleanliness of these workers and their children. As a result, there was one barber (in my time) who refused haircuts to male Maori and the local cinema (referred to as The Bughouse by everybody) was segregated between upstairs and downstairs.

By the mid-sixties, cinema segregation achieved a much better system (non-racial) by reserving upstairs to those fitting the dress code. Housing for itinerant workers had also become a political issue and pressure was applied to growers to upgrade the accommodation offered.

This also matched a time when Maori were moving to the freezing works for work and subsequently into better housing.

As for bars refusing to serve alcohol, I’m sceptical. It was unlawful, however, for Maori to purchase alcohol from off-sales (the bottle store) and take it home. This was a hangover from the old days and had the support of Maori leaders of the time and of churches. It was changed by Walter Nash’s Labour government elected in 1957. Otherwise, the sole hotel in Pukekohe was well patronised by Maori.

There was no enforced racial separation in education. There was controversy when a Maori primary school was opened in the early ’50s. The Departments of Education and of Health argued, with widespread Maori support, that specific problems in attendance and health would be better served by a school oriented towards local Maori needs.

Maori children were free to attend the other schools if their parents wished.

As for a place called the Reservation, that was hardly an official title. It was a nickname given to a suburb where many Maori lived, rather like Auckland’s North Shore acquiring the nickname of White City, Browns Bay becoming Little South Africa, or Meadowlands Little China.

Robert Bartholomew might cast his net a little wider to give his research more balance.