Pakuranga Croquet Club has won the Auckland Teams Championship for the first time in a decade.

The team, which was undefeated all season, beat the fancied Warkworth team 8 to 4.

The successful team was made up of Neal Henderson (captain), Tony Sullivan, Steve Field and Gill Warn who was also a member of the previous winning side. 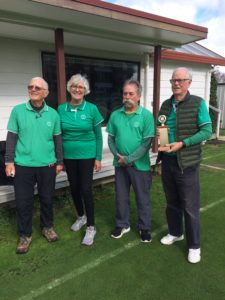