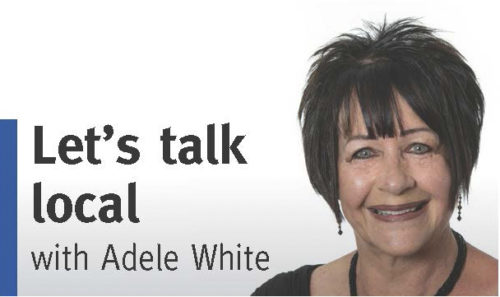 Great feedback
The Howick Local Board recently asked for feedback on the draft Local Board Plan for the next three years. Howick’s locals came to the party expressing what they liked and didn’t like and offering some great ideas. Engaging with the community is important to the board and ensures that this aspirational document reflects the needs of the people.

Howick coat of arms
A brand new Howick coat of arms that celebrates the history and heritage of our local area can now be seen proudly displayed on the front of the bus stop opposite Fencible Walk in Howick Village. This replaces the former one which had become faded and broken.
Howick’s coat of arms originated as a result of a competition held by the Howick Progressive Association in 1953 to design a coat of arms for the newly formed Borough of Howick.

The items depicted on the shield represent the first European settlers in Howick.
The cannon refers to the origin of the village of Howick as a Fencible military settlement; the well signifies the importance of water to the first settlers – each Fencible family had its own acre of land and its own well; the medieval ship or cog – some accounts suggest that this is a Greek or Phoenician ship – represents the sailing ship ‘Minerva’, which brought the first Fencibles and their families to Howick in 1847. The motto ‘Serve with good will’ is adapted from the motto of Sir Henry George Grey (1802-1894), Viscount Howick, afterwards third Earl Grey, who was Secretary of State for the Colonies at the time of Howick’s settlement.

Some more good work
Pohutukawa Avenue residents will be pleased to see that work has been commenced on repairing the steps down to the esplanade of the Mangemangeroa Reserve. These were damaged by one of many slips after a significant weather event caused heavy overland water flows. The stairs have been unable to be used for some time. Comprehensive geotechnical investigation has been necessary to ensure that the new structure is suitably robust.
Also in Cockle Bay, the Shelly Park Cruising Club now has a new retaining wall to repair slip damage and provide stabilisation to a nearby bank.

Saving water
You may have heard the saying ‘save water, shower with a friend!’ At this time of a severe water shortage, we need to give serious thought to ways we can save water. Those that are reliant on tank water have some great strategies they use when the water gets low.
. Introduce a timer to ensure showers are kept short.
. Whilst you shower, collect the used water by placing a bucket at your feet. This water can be used for outdoor tasks including watering the garden.
. Run the dishwasher or washing machine only when you have a full load
There is a ban on the use of garden hoses.so that means no watering the garden or lawn, no cleaning the car, no water blasting the concrete or washing the house down.
This water shortage is serious business, and we must all do our bit to save water.