Back in 1989 my wife Sharron and I road tested Mazda’s sixth generation 323 GLX sedan.

This mainstream four-door with a boot was an extremely good car but what made it memorable was that it was our first new-car report for Times Newspapers.

The column had a unique ‘His and Hers’ format.

I’d write about the car’s performance and styling, while Sharron would concern herself with how easy (or hard) it was to put a child’s safety seat in, and how many bags of groceries would fit in the boot.

Sharron stopped writing 10 years ago, when life got in the way. And now, 30 years after being handed the keys to Mazda NZ’s press car, it feels like the right time to put away my ballpoint pen and box Brownie.

The motoring media landscape has changed, partly due to the growth in digital advertising and advertorial content.

But the catalyst for my ‘retirement’ was a phone call from Maria Tsao, Mazda’s NZ’s long-serving and awesome PR person, offering a drive of the latest version of that first test car: a Mazda3 sedan. 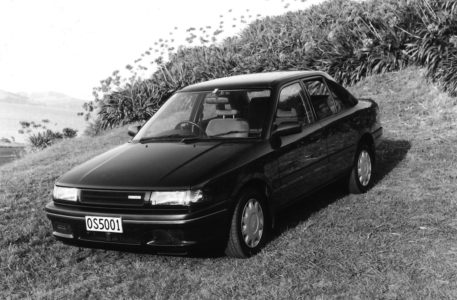 Sure, I could have wrapped up my association with the Times by reviewing some exotic supercar and go out in a blaze of tyre smoke, but as appealing as that sounds, the three decade Mazda thing just works.

I could wax lyrically about all the improvements in active and passive safety, performance, fuel efficiency and specification, but hey, that’s a given.

What really matters when comparing the two is that although small sedans are well and truly on the way out, Mazda is persevering with one

And it has done much more than persevere.

Considering a sedan’s aging target market and that Mazda also offers a sporty-looking Mazda3 hatch at the same $48,795 price, it should be all conservative and boring. But it most definitely isn’t.

There’s a willing and composed chassis under the sleek sheetmetal, one that encourages you to press on and attack corners. Yet it’s comfortable enough to not alienate those who just like to amble along.

With the 2.5-litre engine’s 139kW of power and 252Nm of torque, it has ample grunt but two-cylinder deactivation provides excellent fuel efficiency on the open road.

A dark-toned leather interior oozes class and being the top-spec Limited model it boasts an impressive array of safety, and comfort and convenience, features.

What I can’t tell you is how a child’s safety seat fit.

The infant that Sharron was strapping into the 323 sedan is now 33-years-old, and his younger brother and his wife are expecting our first grandson.

No doubt Sharron and I will be strapping the young fella into a car seat or two but we won’t be writing about it. There will be plenty of new-fangled digital photos taken though.