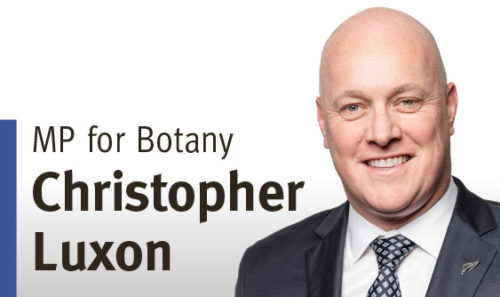 In my first official column in the Times as the new MP for Botany, let me firstly say a big thank you for putting your trust in me to represent you.

I feel incredibly humbled and proud and want you to know I’ll never take that trust for granted.

It was certainly a tough and disappointing election for the National Party with the voters sending us some clear messages, yet I do want to acknowledge my great friend Simeon Brown who was re-elected as the MP for Pakuranga with the largest majority in the National Party.

I also want to congratulate my opponents, Naisi Chen and Damien Smith, who join me in Parliament as list MPs for their respective parties.

The government now has a big mandate and absolute power with an unprecedented super majority, and so there are absolutely no excuses for them not being able to get things done in the next three years. My intention is to work constructively with the government to hold them to account on their promises and make sure they deliver for east Auckland.

Our leader Judith Collins assigned me the spokesperson roles for Local Government, Associate Transport and Iwi Development which I am very excited to learn about and get stuck into. These portfolios also link nicely into the challenges we see in east Auckland too.

Since the election, the 40 newly-elected MPs (over one-third of the Parliament) have been receiving an induction on all the protocols in parliament including asking questions in the House and how Select Committees work.

We were each officially sworn into the 53rd Parliament as new MPs last week with the State Opening of Parliament, and then the hope is that we will deliver our maiden speeches before Christmas.

As you can imagine, I have described the feeling as being like a new student starting at the new high school. In fact, I’m not too proud to admit I have managed to get lost in Parliament House twice already.

In closing, I think regardless of the different political views we hold in Botany and in this country, we can all agree that we are incredibly fortunate to be New Zealanders and to live in this place.

I believe more than ever, New Zealand has a great future ahead of us, that we can do better, we can be more prosperous and more ambitious and make our lives better. That’s the work we all now need to get into!

We will be moving our Botany electorate office shortly to a new location that will better help us serve and advocate for all the constituents of Botany. However, until we confirm the details, please do not hesitate to contact me and my office anytime on 0800 628 268 or email me at botany@parliament.govt.nz.