Northpark residents will get the solar-powered light the Howick Local Board promised for Tarnica Park.  The board has allocated up to $5000 to install a single sensor-driven light in the park, the scene of ongoing anti-social behaviour.

Board members received advice not to light the park and to instead spend $10,000 to investigate options and costings for lighting the park’s footpath, but agreed residents needed an immediate solution.  Residents approached the board earlier this year concerned that neighbours avoided the park.

In August the board resolved to have a light over the playground, but staff warned a single light might displace bad behaviour to another area of the park and could encourage more activity around the playground. 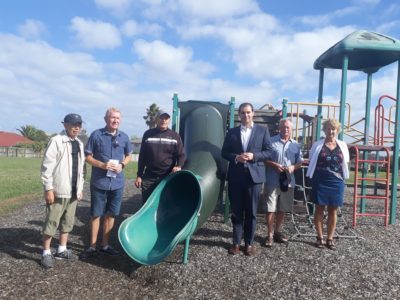 Lighting the footpath and encouraging pedestrians to access the nearby Botany Town Centre via the park, particularly at night, was favoured.

Good lighting can reduce crime, but few Auckland parks and footpaths are lit because it can encourage people to go into isolated areas with poor visibility beyond the lit area.

Board members say while the advice from staff was sound and in keeping with approaches in other areas of the city, the residents had already suffered for some time.

Members had met concerned residents on-site previously and believed a more timely resolution to the problem was needed.