Following the delivery of a petition calling on Auckland Transport (AT) to remove the T2 lane from Pakuranga Road, which was signed by more than 1500 locals, AT’s response leaves no doubt about their lack of interest for what the community thinks, says Pakuranga MP Simeon Brown.

“Since the T2 lane was installed on Pakuranga Road many months ago I have had hundreds of local residents who use the road on a daily basis come to me with their concerns, particularly around the potential for a bad accident to occur,” he said.

Since the lane was first proposed, residents have tried to warn AT that the 50m allowance is not enough to mitigate the risks.

“In their most recent response, AT claims they are simply lining up the lane with the same rules applied around the city, but transport cannot be a one size fits all approach,” said Brown. 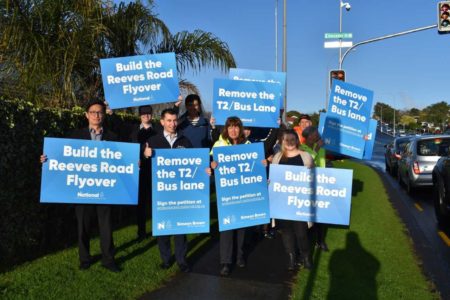 “AT also claim that the lane has improved travel times for buses and multi-occupant vehicles without affecting single-occupant vehicles in general traffic but can only provide vague percentages to back this up.

“Even then, their data shows the lane has made almost no impact either way, so I continue to wonder why it was needed in the first place.”

The response also indicates that planning for the Reeves Road Flyover, which was delayed a few months ago, should be ready for consultation early next year.

“I will keep a close eye on developments in this space to ensure AT delivers the project within the timeframe they have given,” he said.

“I also recently raised concerns with AT about reports I had received from locals that the T2 lane was now being monitored by cameras. AT confirmed they had begun a programme of monitoring the lane to ensure compliance but that, for now, they would only be warning non-compliant drivers.”

They have however stated that formal enforcement will begin after a ‘grace period’.

“This will ultimately be another revenue-gathering exercise for AT, who know how difficult it is for drivers on Pakuranga Road to comply with this lane particularly between Cascades and Gossamer,” Brown said.

“This will ultimately make the lane less safe than it already is, as drivers will now be worrying about being ticketed outside of the 50m clearance.”

“I remain unconvinced that AT has the best interests of our community at heart when it comes to their decision-making around transport issues, and I will continue to advocate for the solutions that Pakuranga needs to fix our longstanding traffic issues.”

I saw the article in the <ITALICS>Times today (December 12) and a comment by Simeon Brown that Auckland Transport only provided vague percentages around the impacts on travel times.

Below is the information that we have provided based on our data collection with clear, robust percentages, the most telling that travel times for general traffic along Pakuranga Road have only been 3 per cent slower month-on-month than prior to the T2 lane being installed and there has been a 7 per cent increase in bus patronage during peak travel times despite significant construction activity as part of Stage 1 of the Eastern Busway.

This is one of the largest roading projects in Auckland and a significant amount of planning was undertaken to provide more travel options and minimise the impact on the local road network while work took place.

The T2 lane, along with new express bus services and a Park and Ride service at Lloyd Elsmore Park were some of these critical measures taken to minimise the impact of construction of Stage 1 of the Eastern Busway by offering more travel choice in the areas of Panmure, Pakuranga and beyond. The data collected from our traffic monitoring programme show that the objective of minimising impacts of construction and providing more travel options to the public is being achieved.

If we did not introduce measures and options such as the T2 lane, new express bus services and maintaining traffic lanes through the construction site then there would be greater travel disruption caused by construction to the travelling public.

Some key results from our traffic monitoring programme include:

<BULLET> The impact on journey times for single occupant vehicles has been minimal since the lane was introduced. Specifically, our data shows that journey times of single occupant vehicles have been an average of 3 per cent slower month-by-month. This is a positive result given the extent of construction activity and reduced construction related speed limits on the local road network.

<BULLET> AT have seen improvements to bus journey times and increased bus patronage of 7 per cent  during peak travel times since construction started. The new 728 and 729 express services that have been introduced to support the T2 / Buslane are the largest contributors to the increase.

<BULLET> Our observations have been that multi-occupant vehicles and buses using the T2 lane have experienced faster journey times.

Stage 1 of the project remains on schedule for completion in 2021. We have seen some positive behaviour change over the past few months with more people shifting to public transport and making changes to their journeys and we thank the people of East Auckland for this cooperation and patience.

The $1.4b AMETI Eastern Busway will bring rapid transit travel options to one of Auckland’s fastest growing areas with a congestion-free, high frequency, busway that will carry more than 7500 passengers during peak hours between new stations in Botany, Pakuranga, Panmure and onwards to other parts of the region. When completed in 2025, the busway will reduce journey times by up to one third by bus and train between Botany and Britomart.

It was also indicated that consultation on the Reeves Road Flyover will take place early next year. The response referred to in the article actually stated that we will have a clearer view of the timeline for construction of various elements of future Eastern Busway stages, including the flyover, early next year.