The fight to save Stockade Hill views went national last week, as the campaign appeared on TVNZ’s popular Seven Sharp.

The show featured a story about the efforts to protect the views and included Tony King’s catchy ‘Stock Aid’ song, along with interviews with a number of key people involved in the long-standing battle.

As covered by the Times last week, Stock Aid was the idea of songwriter Tony King and fellow producer Phil ’PJ’ Taylor, who have created an anthemic 7-minute song and video they hope will help bolster support and raise funds for the cause.

Their efforts – a New Zealand ‘first’ for a community protest song – were picked up by national TV, putting them and Stockade Hill firmly on the map.

The Seven Sharp piece featured Stock Aid’s YouTube video, and included some stunning drone footage, showing viewers all over the country why this is a landmark with unique views worth preserving.

Seven Sharp’s presenter Hilary Barrie exclaimed: “Go Howick – I do love a community stoush. I hadn’t realised the view was so beautiful from there – makes me want to go and visit”

Whilst there have been some encouraging ‘wins’ of late, and positive noises from some members of the Local Board, the fight is definitely not over – yet. 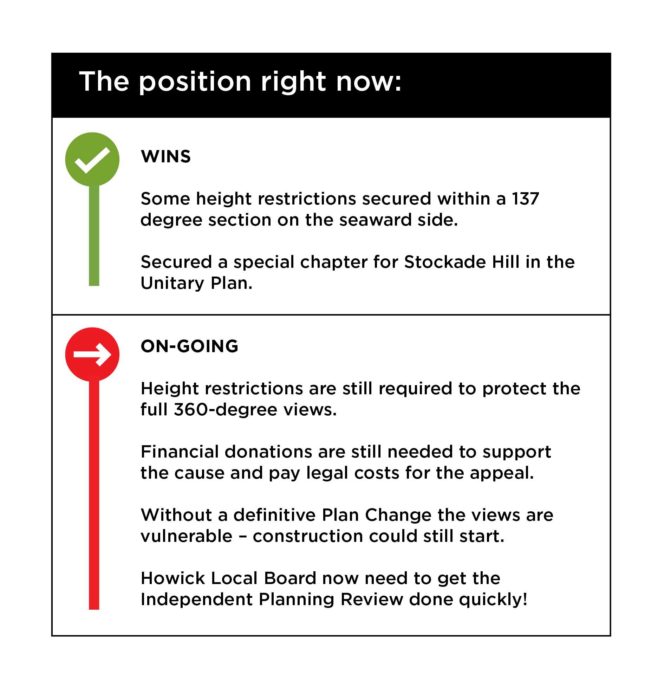 “This is by no means over and we are not giving up,” said Janet Dickson.

“Our legal appeal delivered a great win – a ‘special chapter’ in the Unitary Plan that paves the way for further protection.”

As Times readers will know, the battle to save the outstanding 360-degree views from this iconic Howick landmark has now been going on for more than four years.

Generous supporters have donated approximately $45,000 so far, helping fund the expert advice needed to stage the appeal. While this now may be heading towards a positive outcome, there are still sizeable legal bills to pay, and the campaign team aren’t letting up on fund-raising activities.

“We have to be creative in finding new ways to generate donations and keep our story in the news,” says Defencibles member Tracey Fox.

“When we heard about the Stock Aid song that Tony King created, we thought – this is genius! Over 1000 people have viewed the music video on YouTube: we just hope that a few of those find their way through the Givealittle page to drop us a donation.”

So what’s next in the continuing saga of Stockade Hill views?

Campaigners and the public now have to wait for the Howick Local Board’s Independent Planning Assessment. Once completed, we expect a permanent Plan Change which should protect the stunning views, which are a fundamental part of Howick Village’s heritage and a unique natural beauty.

“We know how to achieve what everyone wants, and we eagerly await the results of the independant planning review. We just need Howick Local Board to get a move on!” says Defencibles member Ron Fielding.