This championship has been going for 52 years.

In September the boys premier basketball team won the zone 1 regional championships beating Rosmini in the final and qualifying top seed for the upcoming nationals. 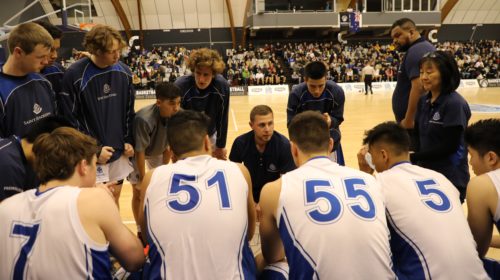 At the national championship in Palmerston North, the boys went through the tournament unbeaten – beating Mount Albert Grammar in the semi and Rosmini in the final.

Coach Aaron Young said: Before “nationals started, our first goal was to finish top of our pool. We knew if we did that we would be in great shape for the quarters and the rest of the week.

“After a slow couple of days and some tough games against some good teams, we finally started to find our rhythm at the right time – beating Napier Boys was a massive win for us and allowed us to get ready for the quarters while everyone else had to play an extra game.

“We got some rest and then our momentum and confidence took over and we started to play some of our best basketball of the season in the biggest games.

“The support we got from friends and families all week was unbelievable. We had the loudest fans and made such a massive difference, giving us the energy we needed every time we stepped on the floor. The boys gave it everything and I couldn’t be more proud of their efforts. It’s been a special season and they deserve to be national champions.”