There was a loud bang and a crunch of tyres as an out-of-control car crashed into Ajay Walia’s property.

That was at 90 Pakuranga Road on March 7 at 5.30pm. Before he could recover from the damage, it happened again on March 8. Another car drove over his broken fence and crashed, centimetres away from his home.

Ajay and his wife live in constant fear of people accelerating whilst running an orange or a red light as they turn the corner from Ti Rakau Drive to Pakuranga Rd. They’re afraid those cars will lose control of their cars and crash onto their property.

“Someone may just die like this. It may be the driver, or a pedestrian walking on the footpath, school children or even one of my family members who are just on the lawn,” fears Ajay.

In the last year, there have been seven crashes with cars skidding over the footpath and crashing into their lawn.

“We are living dangerously and are desperate for help,” says Ajay, who has called Auckland Council numerous times.

Now Ajay has put boulders onto the footpath to protect his family and himself but that hasn’t stopped the speedsters from driving through their fence.

“It is not safe, regardless of whether it is winter or summer. We need some safety barriers to be put up. Even if it is just concrete blocks that they are using next-door where the AMETI demolition work is going on,” he says.

A taxi driver by profession, Ajay says that his battered fence has been fixed 11 times by the insurance company. Now he can’t put in any more claims. 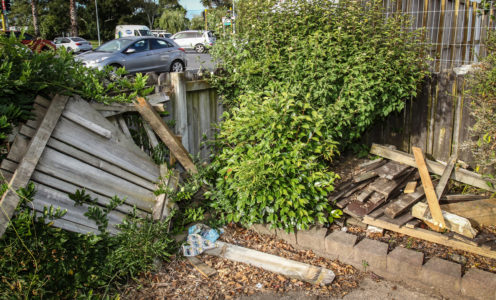 On January 24, 2018 within an hour of the fence being fixed by the insurance company it was hit again by another driver.

In the nine years that they have lived at this address, they have had more than 30 scary incidents. 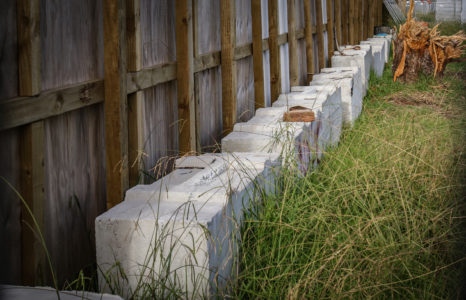 “My wife gets so tense the minute she hears the squeal of wheels. She is so anxious and is unable to sleep at nights.  Next time someone can get killed.”

There have been times when the drivers have been badly injured and they’ve had to call an ambulance.

In one instance, an old client was almost run-over, he says.

“She was walking on the footpath with a walker and a car crashed into my fence just then. She was terrified and said it could have been her. A lot of times there are school kids walking on this footpath. It can kill anyone.”

Desperate for help Ajay shared his story with another customer who recommended that he contact Councillor Sharon Stewart.

On visiting Ajay’s home, Sharon immediately, contacted Shane Ellison, CEO of Auckland Transport and shared her concerns with him. A safety officer soon visited the site and recommended that a safety guard be put.

“He did say that while AT has used up their budget for the year, Howick Local Board has a surplus AT budget that they could use. It’s an absolute shame that it has taken this long to get anything done. It was on the agenda of the local board to discuss this urgent matter and allocate a budget for it…. but they decided not to. I am so embarrassed by it. I don’t want to attend anyone’s funeral,” she says.

“I have called the Howick Local Board so many times and have visited the office over six times. We once had Howick Local Board member Jim Donald visit us and he said that this has been happening for the last 20 years, from the time an old couple was living here. He said they would look into it but nothing has happened so far,” he says.

He started keeping a record of calls to Auckland Council after called to complain five years ago and was told by a council staff member that there was no record of any incidents happening at that site.

David Collings, chair of Howick Local Board, says that the board couldn’t discuss the matter because there were too many other things on the agenda to discuss.

“We need to discuss it as a board but haven’t got down to it. We have got a suggestion from Auckland Transport to put up a safety barrier that would cost around $50,000 but there is a formal structure we have to follow.  It’s unfortunate but it’s something we have to do.”