In an out-of-the-ordinary move, a group of talented tamariki are jumping into the water at Vector Wero Whitewater Park for an unprecedented aquatic adventure.

The park is designed for rafts, kayaks and other on-water devices but now, a handful of promising swimmers – including Howick and Pakuranga youngsters – will be conquering the currents and eddies in the inaugural Field of Dreams Swim the Lake Challenge.

While they are put through their paces in the lake – kayakers and ducks will be riding the white water during the Auckland Rapids Festival making the lake water flow in unpredictable ways.

Rick Pickard, John Walker Find Your Field of Dreams (FYFOD) general manager says, “When we bring children to Vector Wero Whitewater Park for rafting they always want to have a swim, but we can’t let them. 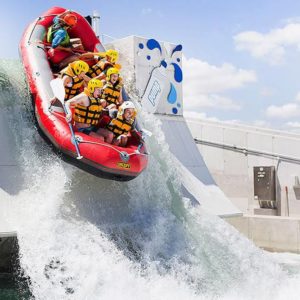 “Auckland Rapids Festival is an ideal opportunity for our promising young swimmers to test their skills in different environment that they may encounter during a future triathlon, or lake or ocean swim.”

The swimmers, aged between 10 to 14, were spotted during swimming lessons with FYFOD programme and now they swim competitively for clubs in east and south Auckland.

In July, they attended a FYFOD swim camp to improve their swimming skills and they were challenged to take on the lake swim.

Spectator entry to Auckland Rapids Festival is free and there will be non-stop action at Vector Wero Whitewater Park from 8am-3.30pm on Sunday October 20. Visit rapidsfestival.co.nz for more information.