And at the halfway mark I have no hesitation in saying, that what New Zealanders have done over the last two weeks is huge.

In the face of the greatest threat to human health we have seen in over a century, Kiwis have quietly and collectively implemented a nationwide wall of defence.

You are breaking the chain of transmission.  And you did it for each other.

As a Government, we may have had pandemic notices. We may have had powers that come with being in a national emergency. But you held the greatest power of all. You made the decision that together, we could protect one other. And you have.

You have saved lives.

Modelling provided to my office by economist Rodney Jones on the eve of the lockdown suggested New Zealand was on a similar trajectory to Italy and Spain and that our 205 cases on the 25th of March could have grown to over 10,000 by now without the actions we have taken together.

And new modelling due to be released later today by Te Punaha Matatini suggests that the current controls at Alert Level 4 have already had a significant impact on new case numbers and we are on track to meet their most optimistic scenario.

Instead of the horrific scenes we have seen abroad we are at 1239 cases, and the total number of cases has fallen for the last four days with 29 new cases today, the lowest daily number of cases since the 23rd of March, before the lockdown began.

We are turning a corner, and your commitment means our plan is working.

But to succeed, we need it to keep working. Success does not mean we change the course. Removing restrictions now would allow the virus to spread rapidly once again and we could be back to the starting line within two weeks. That’s also why we will keep enforcing the rules. In addition you will have seen an increase in police enforcement in recent days, I expect that to continue, including road blocks in some places this Easter weekend. While most people are doing the right thing, some are not. We cannot let the selfish actions of a few set us back.

No one wants that, especially after all that everyone has sacrificed to get us here.

I have read messages from those who have lost loved ones they couldn’t come together to grieve for, brand new parents whose most joyful time has been made so difficult because of separation. Businesses who are worried for their livelihoods and for the family that are their employees.

I am acutely aware of the pain many New Zealanders are feeling.

Over 1 million of our fellow citizens are now supported by a wage subsidy, many of whom will be experiencing a cut in income.

At the end of March there were already an extra 4,866 Kiwis on a benefit, and last week that number increased by another 10,000. And many businesses are reporting that they may not be able to re-open at the end of the lockdown period.

I want to give you all the assurance that I can, that the health and wellbeing of you and our communities has always been on our minds as we have made decisions on COVID-19, but so has your livelihoods.

We will continue to stand alongside you.

We have made record investments to keep as many businesses as possible afloat and people in jobs. We are doing what we can to cushion the blow and plan for our recovery.

But as I’ve said, this is going to be a marathon.

Our plan for that marathon, is to keep eliminating the virus from New Zealand. We can do that by keeping it out of the country, but also by rapidly stamping out any outbreaks that flare up. And that plan is the very best thing we can also do for the New Zealand economy.

The best economic response continues to be a strong health response.

That’s why I am announcing the next stage of initiatives to scale up our health response to put us in the best position possible to exit Level 4 and prepare for Level 3.

No matter what level we are at in the future, there are three areas where we need to become water tight.

Firstly, our borders must be tightly managed. 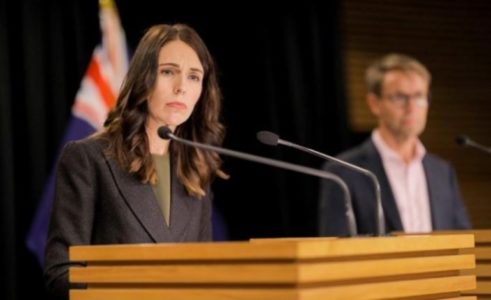 That’s why from midnight tonight every New Zealander boarding a flight to return home will be required to undergo quarantine or managed isolation in an approved facility for a minimum of 14 days.

I am also signalling that the requirement for 14 days of quarantine or managed self-isolation in a government-approved facility, will be a prerequisite for anyone entering the country in order to keep the virus out.

As an island nation we have a distinct advantage in our ability to eliminate the virus, but our borders are our biggest risk.

The Government has gone harder earlier with border measures compared to other countries, but even one person slipping through the cracks and bringing the virus in can see an explosion in cases as we have observed with some of our bigger clusters.

The quarantining of returning New Zealanders will be a mammoth undertaking.

For context nearly 40,000 New Zealanders have returned home since the 20th of March, when we closed the border to foreign nationals. That is more than the all of the hotel rooms across the country that we could have properly housed people in.

There has always been urgency around this matter, but simply put, we could not have done it from the beginning, but we are doing it now.

However we are now seeing major reductions in New Zealanders returning. Since the beginning of Level 4 around 6500 have returned, reducing to only 40 yesterday.

A network of up to 18 hotels will be used to implement this approach, of which one to two will be specifically set aside for those under strict quarantine conditions.

The second aspect of our ongoing COVID-19 response is significantly scaled up and faster contact tracing and greater use of technology.

The more we improve the speed and effectiveness of our contact tracing, the better placed we will be in breaking the chain of transmission.

The Ministry of Health is already working on a locally developed app that will assist with contact tracing.

I should caution that it is in the early stages, it will have basic functionality, but even that will be important as it will help update our national health database with users contact details.

Then they will look to add functions. We are investigating the Singaporean Government’s Bluetooth-based app TraceTogether that can record interactions between a phone and any other phones nearby that have the app installed.

The data is stored on the phone and if the user tests positive they then release the data to the government for contact tracing. Close contacts can then be automatically notified of their need to self-isolate and be tested.

Singapore are planning to open source their technology in the next week. We have made initial contact with the Singaporean Government and registered our interest, and I have a phone call with Prime Minister Lee of Singapore this evening where I will be discussing this technology further.

I think it’s important to note that these kinds of apps are useful, but don’t solve everything. What’s most important is that you have good people, and enough people, working on contact tracing as quickly as possible. We do, and we continue to improve every day.

And finally, this ongoing plan must be underpinned by testing.

We already have incredibly high rates of testing compared to others, but we want to do even better.

We will be maintaining high levels of testing and supplementing it with additional testing to ensure we have greater levels of certainty around the decline in the viruses spread.

With these three pillars, border controls, rigorous testing and contact tracing, we have what we need to win this marathon.

But I know in a race it’s important to have some signposts.  To know where we are, and exactly what we need to do when we get there so we can all plan.

Let me set out the timelines then for some key decisions that will affect everyone.

Level 4 has come with some heavy restrictions. That has required difficult decisions around services and businesses that can and cannot operate.

We need to give similar more detailed guidance on what life at Level 3 looks like, and we will do that next week. That will give us a window to iron out questions and issues, and make sure we’re as prepared as we can be when it comes time to move.

It is then my intention that on the 20th of April, two days before the lockdown is due to finish, Cabinet will make a decision on our next steps. That’s because we need to use the most up to date data that we have to make that decision.

That means, if we are ready to move to Alert Level 3 business we will have two days to implement arrangements.

But let me say again, we will not be moving out of Level 4 early. If we move to early, we will go backwards.

In the meantime I ask every business to use the time you have to prepare for what every alert level may mean for you. Treat Covid-19 like a health and safety issue. Ask whether it’s possible for your business to have social distancing? Can you build in contact tracing tools or mechanisms to keep track of your supply train and customers? Help us get ready as a nation for the marathon we must all run together.

I know we can do this. And I know that, because we are already.

So as we head into Easter I say thank you to you and your bubble. You have stayed calm, you’ve been strong, you’ve saved lives, and now we need to keep going.