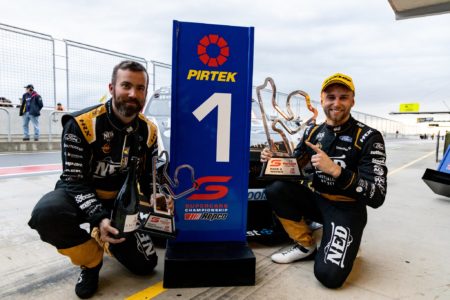 A maiden Supercars victory has capped a strong weekend from Dannemora’s Andre Heimgartner and the #7 Ned Racing Mustang at the OTR SuperSprint.

After topping practice and storming to his second career Armor All Pole Position, the Kiwi was masterful in the changing conditions at The Bend Motorsport Park which saw rain, carnage and tyre strategy mix up the field as Heimgartner delivered both his first Supercars win and the first victory for Kelly Grove Racing.

“It’s big relief for – me, my team – everyone’s been working so hard, especially for me the last six years,” race-winner Heimgartner said.

“It’s so good to finally get one and know you can do it and know that if you’ve got the car, you can 100 per cent get the job done. It’s a lot of pressure off my shoulders as far as that goes. I think I’ve proven to everyone that I can do it, there’s no doubt now.”

The 25-year-old had shown formidable pace earlier in the day, topping Practice 2 ahead of a three-part knockout qualifying format, which was made even more difficult due to changeable weather.

The first stage of qualifying, Q1, brought much wetter conditions with Heimgartner easily making it through to Q2, where he stormed to a 2:06.447, a whopping 1.1 seconds faster than the rest of the field, enabling Heimgartner to make it through to Q3 to challenge for Pole Position.

As the track conditions changed with intermittent rain during the session, key rivals fitted new tyres for Q3, however the #7 Kelly Grove Mustang stayed on the same set for all three stages of qualifying in order to keep up critical residual heat.

Heimgartner used them to devastating effect, posting a 2:07.88 lap time with just under five minutes remaining in the session that wouldn’t be matched, securing his second career Armor All Pole Position, and the first for Kelly Grove Racing.

The changeable weather in qualifying continued for Race 9. From pole, the New Zealander was hustled for the lead off the start and dropped to third, yet recovered almost immediately, retaking the lead at turn 6 with a gutsy two-car pass from third position to lead the 26-car field across the line at the end of the first lap.

Heimgartner then pushed the #7 Ned Racing Mustang to fastest lap after fastest lap, building a six-second lead before a pit-lane incident looked to thwart any chance of victory. Taking his compulsory pit-stop on the ninth lap, Heimgartner was released from his pit bay into the path of Jamie Whincup, the pair making light contact.

The incident saw Race Control deliver Andre a five-second time penalty, but it was not enough to stop the Ned Whisky Racing Mustang stretch its advantage over the field to win by 8.9 seconds, reduced to 3.9 after the penalty was applied.

Sunday’s Race 10 and 11 saw Heimgartner’s strong pace continue with a pair of Top Ten finishes – a seventh and 10th.