American playwright Ken Ludwig has written around 30 highly successful plays – among them The Beaux Stratagem, Lend Me a Tenor, and Shakespeare in Hollywood. In this one, set in 1936, he chooses to spoof the great Sherlock Holmes.

Broadway star William Gillette, famous for his leading role as the fictional detective, has invited fellow cast members to his Connecticut home for a weekend of Christmas revelry.

But when one of the guests is stabbed to death, he assumes the persona of his beloved Holmes to track down the killer before the next victim appears.

The play evolves like a mystery thriller, as one tantalising clue leads to another. From the intriguing opening mini play-within-a-play to the surprise last scene a split second before final curtain, The Game’s Afoot gives you everything you love about great live theatre. 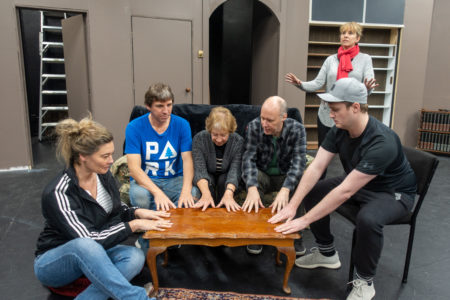 Billed as a comedy thriller, this glittering whodunnit offers twists and turns, danger and non-stop hilarity.

Ideal for HLT’s final show for 2019 – a Christmas gift of laughter!

The Times has two double passes to give away to The Game’s Afoot. Log on to www.times.co.nz/competitions and send in your entry by November 4.