A much loved Rotarian Paul Cressey who was actively involved with health care governance has passed away following a tragic accident at a restaurant.

Known for his philanthropic work, Cressey was an inspirational leader who was passionate about education, people’s wellbeing and community work. He made it his life’s mission to make a difference on so many counts.

The Half Moon Bay resident was chairman of the South East Auckland Life Education Trust for 16 years, chairman of Menzshed, chair of Medication Safety Programme Steering Group, board member of Counties Manukau District Health Board for 12 years, board member Royal New Zealand Plunket Society and treasurer of Rotary Club of Half Moon Bay.

A local pharmacist for many years, the health champion left the profession in 1982 after his nine-year-old son Carl lost his battle to leukaemia.

It marked the beginning of Cressey’s long-standing relationship of 40 years with the Child Cancer Foundation  (CCF) and Ronald McDonald House. He helped CCF set up divisions throughout New Zealand including Wellington, Christchurch and Dunedin.

The local hero, turned a personal tragedy around by helping other families with seriously ill children through his work with CCF and the Ronald McDonald House. 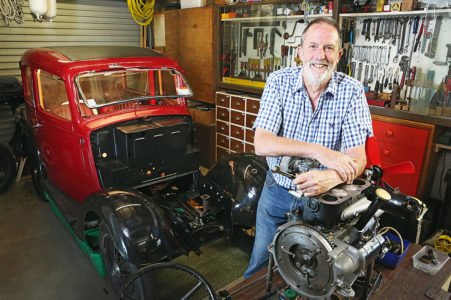 In an article published in the Times (June 2007) on the occasion of him receiving a Queen’s Birthday Honour, he said: “I decided there was more to life. This wouldn’t have happened if we hadn’t had a little boy with cancer. It confirmed a real meaning for Carl’s life with us.”

Prior to Carl’s death, the family travelled to Australia for treatment and were the second family to stay in Australia’s first Ronald McDonald House.

“When we got there it was quite amazing. We met some wonderful people and had some wonderful support. It was just unbelievable. It made me feel as if other people cared.

“I wanted to make sure [other families] never felt alone,” he said.

“We always said we wanted to create awareness of children with cancer. I guess we’ve done that.

“They made a bit of a fuss on the board. The experience has been magic and very fulfilling. It’s recognition of the progress we’ve made. That’s what the award really means to me.

“I accept it on behalf of many hard working individuals. I see this as recognition of them as well. You don’t have to be a celebrity – it’s nice to be an ordinary Joe Bloggs on the street.”

Along with the Queen’s Birthday Honour, Cressey received the first CCF life membership in 1991 and was also honoured with a prestigious Rotary Paul Harris Fellowship.

A funeral notice says: CRESSEY, Paul Roger ONZOM. On June 24, 2020 following a tragic accident we lost our beloved Paul. Precious husband of 54 years of Sheryn, treasured dad and father-in-law of Mark and Julie, Charmaine and Brian and the late Carl. Fun loving PC, of his adored Grandchildren Kate, Sam, Grace, and Stella. “The brightest stars shine to remind us that the special people we lose are always with us.”

A service to celebrate Paul’s life will be held at the Bucklands Beach Yacht Club, Ara-tai Half Moon Bay, on Tuesday June 30 at 2pm. To be followed by Private Cremation.

In lieu of flowers donations to either Ronald McDonald House, P O Box 110119, Auckland Hospital, Auckland 1148. Or the Child Cancer Foundation PO Box 152, Shortland Street, Auckland 1140, would be much appreciated.

No new cases of Covid-19

No new cases of Covid-19