“It’s a real privilege to be the Howick Youth Council’s (HYC’s) co-chairs at such an exciting time at our 10 year anniversary,” said 2021 co-chairs Danica Loulié-Wijtenburg and Ben Fraser.

“The past decade of passionate community service has led to where we are today: one of Auckland’s longest-standing youth councils with a dedicated membership of 37 rangatahi, contributing almost 10,000 volunteer hours to the wider east Auckland community every year,” they said.

“Our annual work programme of almost 20 projects, work to represent, develop and connect the approximately 20,000 local rangatahi in innovative and engaging ways.”

However, they said, these headline statistics don’t reflect the depth of the youth council’s history and the  service its members volunteer every year.

“So we’re grateful to have had the opportunity to celebrate HYC’s immense growth with our local community, especially since a lot of our success depends on the support we receive,” they said.

“The Howick Local Board, in particular, has been a foundational supporter of ours, not only generously funding us, but also encouraging us to grow as young leaders.”

They said HYC’s past decade of activity is a testament to the impact a youth council can have, both for its members and the local community. 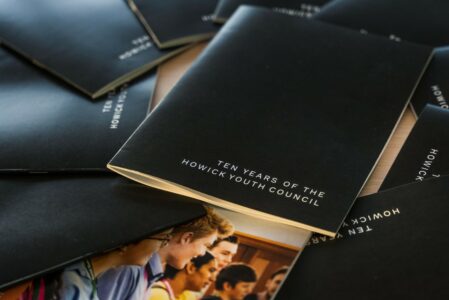 “We’ve been members for more than three years and we’ve come back each year because it’s such a truly empowering and transformative space to be in,” they said.

“We’re able to develop in such important areas as collaboration, large-scale project coordination and facilitating change – all with a remarkable degree of independence.

“There’s also immense value for the wider community with the representation of youth voices in local government and the delivery of youth-focussed initiatives. HYC is a bright and diverse whānau and, while this is our final year on the council, we’re eagerly looking forward to HYC’s next decade.”