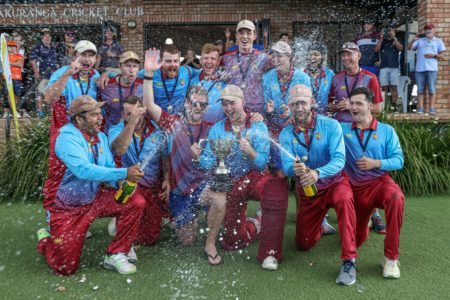 The final, at Lloyd Elsmore Park at the weekend, saw Bays win the toss and bat first.
Bays made a confident start despite losing both Cole Briggs and Ryan Schierhout (28) in the powerplay. Schierhout’s knock included a four and two sixes to get the visitors moving in the early exchanges.

The knock of significance came from all-rounder Ryan Harrison (54), who held the remainder of the Bays innings together. While Seb Langridge and Campbell Knowles finished the innings off nicely, both sides would have been pleased with their efforts during the first innings.

For Howick Pakuranga, Taine Jolley finished with figures of 2-19 bowling some of the tough overs, while Donovan Grobbelaar put four steady overs beside his name.

Chasing 155, Daniel Young (26) wasted little time in taking on the Bays’ bowlers, hitting three fours and a six inside the first three overs.

Bays stayed in the contest with the wicket of Grobbelaar before Walsh (41) hit a pair of sixes in a 17-run 15th over.

Though Phil Mecredy struck twice with a handful of runs to get, Andrew Morrison (27*) and Adam Jones were on hand to hit the winning runs and secure Howick Pakuranga’s third T20 Championship.