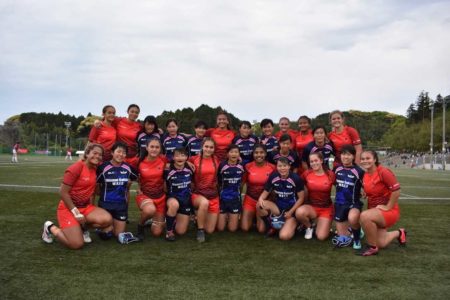 Howick College achieved something of a first at the end of 2018 when they came away with two National Championship titles in both the U15 Girls and the Senior Girls Divisions at the Youthtown Condor Rugby Sevens National Secondary School Tournament.

As a result of their success, the Senior Girls team was invited to play in the Sanix Youth World Rugby Tournament in Japan 2019 last month.

After losing nine members of the original team, a young and inexperienced squad began training and trialling from the beginning of February. With the final selection made and after months of fundraising, the team departed on April 22 for Japan.

The first day at tournament saw the team play three pool games; two against Japanese schools and one from Russia. A good win against Otemon Gakuin High School from Osaka 50-5, was a great way to start the tournament. The next game was very tight and finished with a 14-12 win against Kanto Gakuin Mutsuura High School from Kanagawa.

The final pool game, against Moscow Girls, was very physical but the team came through with a 29-0 win. Howick College finished top of their pool and headed into the semis on day two.

The semis saw the team up against the Fukuoka Ladies Team, a club team that was fast and strong. Fukuoka Ladies finished on top, leaving Howick College to battle it out for 3rd and 4th place.

In a close match against Kanto Gakuin Matsuura High School, with the lead flipping from team to team, the Japanese team finally took the 19-15 win.

It was a fantastic experience for the team who were proud ambassadors for their families, school and New Zealand. Their trip saw them travel to Tokyo, Kyoto, Fukuoka and Osaka and, with the help of the Asia New Zealand Foundation, they were able to experience some of the unique Japanese culture.