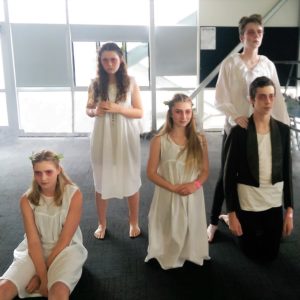 All schools in the region were invited to attend and take part in the annual festival that celebrates the work of William Shakespeare. (SGCNZ) is a life skills enhancing organisation through Shakespeare. It interacts and collaborates with Shakespeare’s Globe in London.

The group, made up of Year 11 and 12 students, explored the age old themes of madness, revenge and human relationships, particularly the impact Hamlet has on his beloved Ophelia.

Despite competing against an array of talented and experienced teams, the drama students from Howick College were thrilled to be announced as winners of the regional competition.

The talented actors from Howick College are now preparing themselves to take their piece to the National Festival in Wellington over Queen’s Birthday Weekend where the will compete against schools from around the country.

This is a five-day intensive programme of workshops and rehearsals that will culminate in public performances on June 2 and 3.