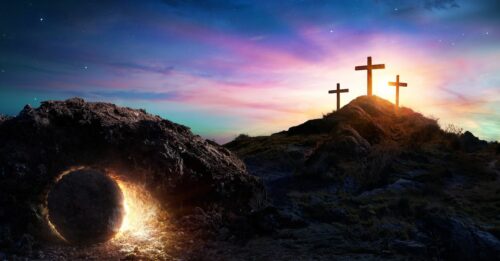 Hope. It’s more dangerous than you think. Hope dares us to live beyond the black and white.

But, it is dangerous. Hope dreams. Hope dares. Hope disrupts. The fictional dictator of the Hunger Games book and movie phenomenon, President Snow, put it like this: Hope.

It is the only thing stronger than fear. A little hope is effective. A lot of hope is dangerous. A spark is fine, as long as it’s contained.

Its fictional origin makes it no less true.

But make no mistake, the hope of Easter was and is a dangerous thing.

At the centre of the Easter story is Jesus of Nazareth who dared to hope for more for humanity, whose life and teaching have inspired countless generations to live lives of love, sacrifice and hope.

But in daring to dream, in daring to hope, Jesus disrupted. He disrupted the religious and political status quo of his time. He called people to life with God that was uncluttered by rules that amounted to human attempts to please God.

He called people to allegiance to a Kingdom that, while not political in its function, would deeply shape the dreams of humanity for its communities.

For Jesus, this hope for humanity was dangerous. It led him to death on a Roman cross, an instrument of terror aimed at cowing a hopeful Jewish population. The cross appeared a hope-less moment.

Jesus’ followers largely scattered, large sections of the population were stirred to turn against him and the promise of hope crucified with him. For Jesus himself, who Christians understand to be both fully human and divine, this was no game of pretend. We see the depth of despair, the loss of hope in Jesus words from the Cross:

Jesus appears literally lost for words and quotes from the poems of his childhood, from Psalm 22. And yet, hope lurks and lingers. For those who heard him utter these words the full breadth of the psalm would have echoed for them. This psalm speaks of the enduring trustworthiness of God and paints a picture of life beyond despair “to the ends of the earth.”

This is the hope of Easter that refuses to go out even in the face of death. Jesus’ death and resurrection disrupted the old normal and made it possible for humanity to hope for life beyond death.

But it disrupts life more even than that. The hope of Easter is not just for hope beyond death but hope beyond life as we know it. Jesus’ dream was to untangle us from the very human ways we try to negotiate life and to offer us freedom. Freedom from proving our own good standing before God, freedom from keeping score, freedom from the rat-race existence of achievement and comparison, freedom to live with an awareness of God’s presence in our lives.

Which is why it is so dangerous. Easter offers us the hope of a disrupted life. A life where love is at the centre. And if there is one thing more dangerous than hope, it is love.