In a first for New Zealand, a new bridge is being slowly pushed across the Tamaki River as part of the $1.4 billion Eastern Busway.

There are four spans and each one is connected to the section behind it. Each launch of the bridge is around 50 metres and will take up to 10 days to inch across the river.

Mayor Phil Goff said this construction method is a first for the country and speeds up the assembly.

“The first of the steel bridge spans were delivered to the construction site earlier in the year and are the largest single steel spans ever to be fabricated in New Zealand.”

The new busway bridge is more than 200 metres in length and contains 1000 tonnes of steel and 2000 tonnes of concrete.

“It’s a feat of engineering and will be an integral part of the completed busway, supporting high-frequency bus travel between Panmure and Pakuranga and eventually Botany once the full project is completed in 2025,” said Goff.

“Thanks to funding provided through the regional fuel tax, this project will transform east Auckland and deliver the transport infrastructure needed to accommodate population growth and support the provision of new housing. Most importantly it will give locals real transport choice and go a long way to easing traffic congestion in the east of our city.”

The bridge runs alongside the existing Panmure Bridge and will include new cycling and walking paths and lookout platforms. 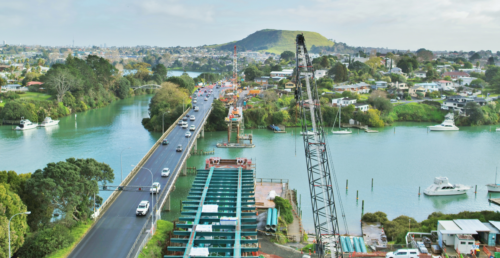 “The busway provides the next critical link in the region’s rapid transit network, linking congestion-free busways with the rail network.  It will also offer better access to viewing opportunities across the awa (river) which is an important historical, environmental and scenic asset for Pakuranga and Panmure,” Lambert said.

Stage 1 of the project between Panmure and Pakuranga is due for completion next year and stages 2, 3 and 4 between Pakuranga and Botany will be complete by 2025.

Councillor Paul Young said the Eastern Busway bridge being launched into place will be visible sign of the progress being made on the project and Councillor Sharon Stewart agrees.

“The Eastern Busway will be game-changing for east Aucklanders, not only connecting the area to the rapid transit network but also providing improved local travel options, enhanced public spaces and a focus on better urban design for the local area,” said Stewart.

The busway bridge will be complete by the middle of next year with stage 1 of the Eastern Busway due to be finished by mid-2021.