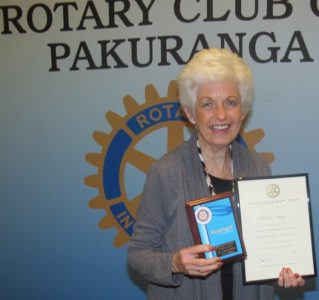 Del and Dawn, Dawn and Del, never one without the other for the last 52 years. That was until the much-loved Dawn Johnston passed away recently leaving long-time Rotarian Del with a huge void in his life. At a moving funeral service that celebrated her life, senior Rotarian JOHN WREN paid tribute to Dawn. Here’s an abridged version which captures the spirit of a very talented Dawn, a former model, hair-dresser, also a devoted wife and mother, most known for her selfless community service.

I first met Dawn a few months after she was born.

Her parents were living in Christchurch, mine were in Invercargill and she was brought to Invercargill to meet her uncles and aunts and cousins. I was 10-years-old but I still remember her arrival at our home.

Shortly after the end of World War II, my parents moved to Christchurch and from that point Dawn and I developed a close bond. Neither of us had brothers or sisters and, by default, we came to fill these roles in each other’s lives. My early memories of her include that of a typical younger sister.

When she was 13 she was introduced to a client of her mother’s business who was a recognised petit-point and embroidery expert.

She provided Dawn with the encouragement and techniques which eventually allowed Dawn to become a recognised expert.

As a teenager she exhibited work at the Christchurch winter shows and the Canterbury Royal shows where she was a regular recipient of excellence awards for handicraft.

Her handcraft work is regarded as outstanding and she went on to complete many commissioned works for both local and international collectors and clients.

During her teenage years she did photographic modelling for a number of local Canterbury manufacturers and was regularly used as a model for cosmetic hairdressing and clothing brands.

1976 was another watershed year for the Johnson family. I invited Del to join Rotary and we were fortunate that he accepted.

Over my 40 odd years as a member of Rotary I have proposed a number of men and women as members. However my nominating Del as a member of the Rotary club of Pakuranga is the decision of which personally I am most proud of.

Firstly it was a bargain; we got two for the price one.  Dawn’s support of Del was outstanding.  Whether she was a team player or team leader, Dawn always made outstanding contributions to her community.

Dawn was a foundation member of Zonta East Auckland and later was a charter member of the Inner Wheel Club of Howick, serving twice as their club president.

On two occasions Inner Wheel has recognised Dawn with an honoured active award.

The Rotary Club of Pakuranga awarded her a Paul Harris Fellowship and some years later a sapphire pin and in in 2017 she was admitted into Rotary as an honorary member.

Her ongoing interest in embroidery and petit point led to the formation of two groups of women interested in developing their own skills.

Two wonderful children, a host to many kittens and puppies as well as constantly watching over other people and finding time to help them in their times of need.

She was known to work behind-the-scenes on Rotary projects such as the clubs annual fishing project.

Dawn lived the Rotary ideal of Service above Self and demonstrated a greater commitment to these ideals than many Rotarians. 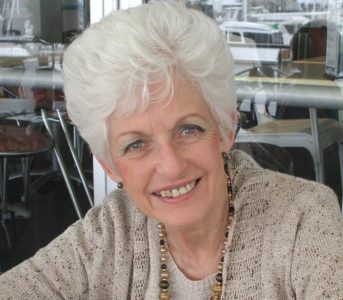 Her legacy is the Dawn Johnson Koru Award established in 2018 to recognise and pay tribute to residents of Pakuranga, Howick and Botany who, in the face of adversity, displayed perseverance in overcoming obstacles and the resolution of their goals and dreams.

Dawn was a woman of dignity with a vital and quiet unassuming energy directed at others with the objective of improving their lives.

Dawn made the people she met feel good about themselves. Dawn you are and always will be a special person in my life.

May you journey on with the understanding that you have left an indelible mark on me and those you have left behind, living legacies to everything in which you believe.

Speaking for Dawn, Del thank you for your commitment, love and devotion over the last 52 years and in particular the sacrifices and energy you have invested in taking care of me over the last 21 months.