Dean Buchanan says he could feel the mountains calling.

Talking to a group of artists and art connoisseurs at the Fo Guang Yuan Art Gallery in Flat Bush where his vibrant canvasses have been exhibited, the 60-year-old artist poked fun at what he calls the pretentious art mafia. In comparison, he says the people he met whilst climbing Mount Cook were all connected to nature and art.

“They expressed raw emotions that are real and honest; just like the coarseness and the texture you see reflected in my paintings—which is different from the art snobs I’ve met over the years,” says the landscape and abstract artist.

“Before you climb a mountain you are overcome with a big fear of the unknown, of what lies ahead.  Then, once you reach the peak after surviving the exertion, it is a huge release!

“To be an artist, it is important to look within you,” says the award-winning artist.

Buchanan, who now lives in Karekare on 10 acres of land overlooking the ocean, has his studio nestled in the bush.

After the physical challenge of scaling Mount Cook, he was thrilled to discover the brilliant greens and colours of the flowers in the valley below.

“The colours look much sharper and you appreciate it even more.” 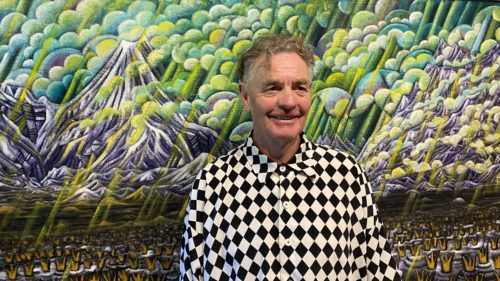 Drawing a parallel between mountaineering and art, Buchanan – who makes his own charcoal sticks – says he approaches his artwork with confidence, just like he does the mountains, without any self-doubt.

“I wouldn’t paint like this if it weren’t for the mountains,” he says.

“I have a click vision. I paint after downloading from myself. Unlike some other artists, I don’t paint from photographs. Besides, there should always be an end in sight. You should know when to finish a painting.”

He admits to giving up alcohol at the age of 46 in order to seek clarity.

Tracing his humble beginnings, he says he started painting as a form of escapism from poverty. It soon developed into a passion.

“As a child I could feel the poverty at home. Art was a form of escape for me,” says Buchanan, who worked with Auckland Art Gallery as a technician for 13 years.

Having been invited to exhibit his paintings at public art galleries in US, Japan and Chile, more recently Buchanan received a call from the Seb’on Museum in Paris asking if they could use one of his paintings of the mythical Whanganui River as a book cover.

Interestingly, his own life has been extensively traced in a book titled Wild Beast -the art of Dean Buchanan, by Bob Harvey, former mayor of Waitakere city.

Rounding up the discussion, Abbess Manshin who curates his paintings at the temple, says she’s seen a distinct change in his paintings. “They now reflect more sunlight and a happy state of mind.”