The Times is celebrating after a successful showing at the recent NZ Community Newspaper Awards.

The competition accepts entries in various categories from independent newspaper and magazine companies from throughout the country.

This year Times Media excelled, particularly with its magazines. 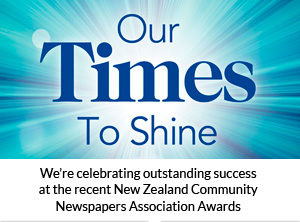 Best Lifestyle Feature Writer was Angela Kemp, a well-known name in the Times stable of magazines. Rawlinson took second place in the category.

“I am thrilled that our team continue to excel,” she said.

“In these tough times it was so nice to have something special happen for the team. We need to still receive the proper awards at a special awards dinner and that will be really relaxed as we know what we have won.”