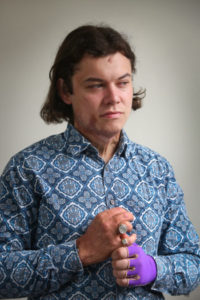 He was broken. Joshua Sade-Inia was angry, sad, hurt and rejected — the all-consuming emotions pushed him over the edge.

Joshua was bullied as well as sexually, mentally and physically abused from the age of two-and-a-half-years as he was moved from one foster home to another. He felt continuously threatened and was so depressed that by the age of 13 he didn’t want to live anymore.

Overcome by the hopelessness of life, he decided to end it by pouring a bottle of petrol over himself. He set himself on fire.

“I can remember every moment of agony, the pain was excruciating,” he told a group of burn survivors and their families at a Survivor Sunday event held recently at the Lounge, Howick by the Burn Support Group Charitable Trust.

“Being burnt is one of the most painful injuries you can sustain. The skin is the largest organ in our body and also the most sensitive. I panicked and ran, but then realised I couldn’t run away from fire. I kept running around. I instinctively tried to remove my t-shirt but that only made it worse. Finally I rolled off the fire on wet grass but then it reignited once I got off the ground.”

Scared out of his mind, he started running again when his foster parents spotted him. Soon the house was swarming with firemen, paramedics and the police.

“I thought I would die and, ironically, I kept telling the paramedics, ‘I don’t want to die’,” says 21-year-old Joshua as he recalls the terrifying incident.

“That was the defining moment of my life. The disfigurement process can take years if not the rest of your life,” he says about the 45 per cent burns that covered almost half his body.

“It is a long term recovery and I’ve had innumerable reconstructive surgeries. I remember the first day I saw the skin graft, I screamed for a solid hour. I couldn’t believe what I looked like and how I’d have to live with it the rest of my life.

“When you’ve had a skin graft, it gets tight after a while. The surgeries continue as the body grows.”

Joshua admits that being introduced to the Burn Support Group at the age of 14 was the beginning of a healing journey.

“While I still suffered from anxiety and continued to be a part of a State foster care system which is very intense for any kid (as every child needs a sense of belonging and nurturing in their lives) the burns support group provided not only awareness, protection/education but also a safe environment where burns victims can come together without being self conscious about their scars.

“The children’s camp is a big stepping stone, where kids lose their inhibitions and are cushioned by the fact that there are others that look and feel like them. To me, they are family,” he says.

Joshua who is currently doing a conjoint degree at the University of Auckland studying law, politics and international relations says that he is keen to get into politics and make a change.

“I went from being a victim to using my negative experiences to help others. Being a survivor of a suicide attempt, I am passionate about mental health and am an advocate for burns survivors and foster care. I’m very ambitious for all those who are struggling and want to encourage them to see light at the end of the tunnel.

Joshua has been doing casual work for MP Melissa Lee as an administrative assistant and also sits on her executive committee as deputy chair for the National Party.

He is a communications team member for a legal charity called the Equal Justice Project (EJP) based at the University of Auckland. “In my role I write articles around current social issues with a legal stance.”

He also plans to start his own charity called WeSoar (which stands for Wellbeing, Expression, Survivors, Optimism, Aspirations, Resilience).

Thorpe crashes out in Women’s Individual Triathlon on wet circuit