Andre Heimgartner has broken through for a podium finish at the WD-40 Phillip Island SuperSprint at the weekend.

With a third-place finish in Saturday’s race, Heimgartner secured his second Supercars podium result and his first as a solo driver (following the third place he achieved at the 2017 Gold Coast 600 as Tim Slade’s co-driver).

The #7 Plus Fitness Nissan Altima driver from Dannemora had started on the second row of the grid for the 120km/27 lap race after qualifying fourth and while he was jumped by his Kelly Racing team boss Rick Kelly at the start, with great car speed he was able to get that spot back through the pit stops amidst a strong race that saw him advance to the podium.

“To be on the podium on Saturday was just fantastic,” Heimgartner said.

“It is a brilliant reward for my sponsors and the entire team, and I am so happy with how it all came together. I was even catching the front-running Mustangs at one point there, but the safety car put paid to that. Even so, after struggling for the past few rounds to find balance in the cars, to finally be turning that around and have a fast car underneath me is really great.

“The points and the result means a lot for the team and the sponsors, all together it was just an amazing feeling.”

Come Sunday’s race, the 23-year-old would unfortunately struggle with a lack of good tyres and car speed, qualifying for and then finishing the 200km/45 lap battle in 13th place while struggling with car speed. 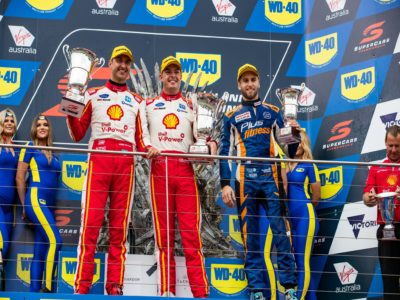