Residents of Point View Dr are having sleepless nights as they worry about their safety.

Boy racers doing doughnuts and wheelies till the early hours, late night parties with drug dealings and fights disturbing the peace at night, sexual paraphernalia strewn all over the  vacant sections of land at 178 Point View Dr, has made it a “nightmare” for residents.

With sweeping million dollar views, the prime locale has for the last three to four years become a playground for the rough.

Anxious residents of the semi-rural area complain that there has been an increasing rash of antisocial elements, leaving behind a trail of broken beer bottles, cans, condoms, syringes and a pile of fast food and takeaway boxes.

Just a fortnight ago, they collected more than 78 bags of rubbish in a massive clean-up.

Judith Grant, president of the Point View Heritage Society, says that back in the day, this was known as the Armstrong block “and never has this area been a magnet for people except on Guy Fawkes Day or New Year’s Eve where people gathered to get a view of the city.

“But now after a builder bought the property and subdivided it in 2013, it’s thanks to social media that hundreds of cars are parked here on the weekends.”

The seven to eight sections that have been bought by individuals but not developed due to the downward turn in the real estate market have become a meet-up spot for the unwanted masses.

There have been instances of a couple of residents who have walked up to the cars parked and requested them to turn the volume down only to be threatened for doing so.

“Since the subdivision of an area of land known as 178 Point View Drive, the problem has increased 50-fold,” Grant says.

“Houses are startng to be constructed along the bottom area of this subdivision, but along the top of the ridge line, sections are still empty of houses.  People come and park their cars to admire the view, eat, drink, take drugs, graffiti and leave behind piles of rubbish and broken glass before they speed off along our winding road, endangering their own and others’ lives with reckless driving habits.

“We’ve had Councillor Paul Young visit us and we have written to the mayor too.

“Over the months we’ve contacted the Council, police, Auckland Transport and the Howick Local Board to help find a solution. But this is a very complex problem and needs all concerted parties to sit together.

“Fortunately Howick Local Board member Mike Turinsky has been quite proactive,” she says.

“He put a post on his Facebook page and got a whole lot of volunteers from his network as well as members of the Asian community who helped with the clean up,” she says.

There is so much litter that now some of the residents walk around the section every day with a rubbish bag and disposable gloves to clean up.

And while the police have now upped their surveillance during the day time, unfortunately it hasn’t made too much of a difference at night, says Grant.

The narrow winding road that was once meant to be a short cut for Moa hunters was never built for traffic.

“There are practically three accidents a week here,” says resident Linden Johnson who admits that driving home late at night the day before, she put her lights on full beam, “since I didn’t want to run over any drunken person  lying comatose on the road.”

Neville and Tracy voice their serious concerns about the kind of people disturbing the peace and quiet of the neighbourhood. They are also worried about walking their dog on the vacant section with broken pieces of glass lying around.

Howick Local Board member for Botany, Turinsky says that being a youth worker, he is aware that the area is used to have a “sesh” as in session”

“It’s a pity that many native plants are uprooted with four-wheeling dangerously racing along the slopes -could horribly crash into homes. The resident of one house complained that partiers were throwing beer cans and bottles at his window in the middle of the night. 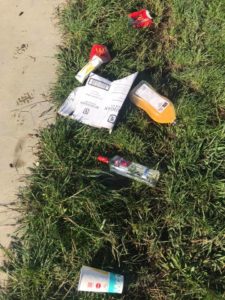 “I have been trying to highlight what has been happening here with the Auckland Transport, Council, and the local board. The Police, who are overworked and thinly spread over, are very aware of this and are increasing patrols. Having street lights would definitely help but there is a lot more action needed to get rid of the antisocial behaviour.”

When contacted, senior sergeant Michael Schmidt Ormiston Police Station said, “The issues around Point View Drive are of concern for Police who have been liaising with local residents and increasing patrols where possible.

“Two of the driveways leading to vacant hilltop sections have had barricades put in place and piles of landfill as a deterrence which has had some effect in reducing problems.

“While people are lawfully able to stop on any street, and in this case enjoy the views, Police will continue to work with the community to address ongoing problems.”