An Auckland Transport (AT) environmental programme will see a population of endangered giant kōkopu fish protected on Waiheke Island.

AT will finish the sealing of a 1491m section of Waiheke’s Awaawaroa Road this week, as part of an environmental improvement trial to reduce the sediment load being discharged to the stream.

The pavement works are being delivered by the Hauraki Gulf Islands AT and Downer road maintenance teams. 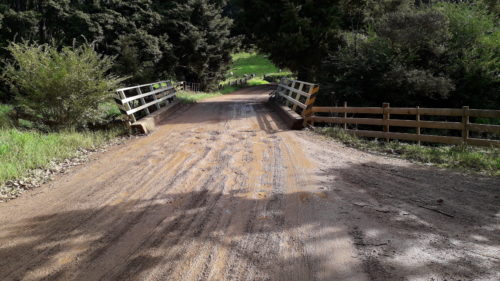 Giant kōkopu, one of five whitebait species in Auckland, is under threat – particularly on the mainland.

The giant kōkopu that inhabit the stream and wetland close to the road, were first found in Awaawaroa Wetland in 2014. This, and the discovery of two new Auckland populations – one in a neighbouring catchment on the southern side of Waiheke Island, and another at Whatipu in the Waitakere Ranges – has slightly improved the prospects for these fish in Auckland.

“We have to therefore move quickly to stabilise the two remaining Waiheke populations. The pavement surfacing will substantially improve the species’ prospects on the island,” says Mr Bloxham.

AT is responsible for over 7500 km of road within the Auckland region and approximately 840 km of this road network is unsealed. These unsealed roads contribute large volumes of sediment to freshwater and coastal receiving environments in the northern, western and southern parts of the Auckland region during heavy rainfall.

While the runoff from many of the unsealed roads is filtered through vegetation before entering the receiving environment, there are a number of roads that transport sediment directly, without treatment, to sensitive freshwater streams and estuaries.

Sediment impacts native fish on so many levels and is implicated in the decline of giant kōkopu populations nationally and throughout mainland Auckland. Sediment has both lethal and chronic impacts on native freshwater fish, reducing juvenile survival and stunting growth,” says Mr Bloxham.

Waiheke Local Board chair, Cath Handley, says the work is a reflection of how the board’s relationship with AT is working to support Waiheke’s ambitions for its precious environments.

“The last local board identified this as a critical sealing project and now it’s happening. It’s identified in our 10 year plan, and has been one where the local board, AT and Auckland Council have collaborated to help protect the wetlands and the habitat for the endangered giant kōkopu. It’s a high point of my time with the Waiheke Local Board.”

“The work will make sure that we reduce sediment when it rains. We are sealing the surface of the road to minimise sediment discharging to the stream and killing the giant kōkopu. This work is not part of our usual maintenance programme. This environmental trial is a unique piece of work and we will be monitoring its results.”