Acknowledging unsung heroes for their service to the community was the Howick Celebrated Citizens Awards held on Sunday at the Howick Club.

Hosted by the Howick Local Board and MCd by East FM’s Phil Taylor, the event was a celebration of selfless achievers who have made a contribution in many fields. 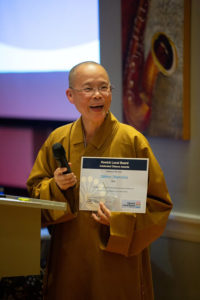 While there were close contenders for the Celebrated Citizens Award 2019, the overall winner was Abbess Manshin of the Fo Guang Shan Buddhist Order. The temple at Stancombe Rd, Flat Bush, is known not only for its interfaith work but also for world-class art galleries, a very popular vegetarian cafe, a popular children’s project attended by local schools, Buddha’s Birthday which brings tens of thousands of people to the temple to celebrates peace and diversity and a close partnership with NZ Police.

Amongst other winners that evening, was the Rising Star Award won by Howick College student Ethan McCormick, a young environmental activist who is a big part of the Pest Free Howick Ward team.

Winning the Kauri Environmental Award was Matthew Brajkovich for his longstanding contribution to maintaining Howick Ward’s beauty and ecological sustainability including restoring the Cockle Bay Domain.  The Exceptional Service Award was won by the St John Opportunity Shop in Howick which is a vital part of the community.

A testament to the community work that she does was the Golden Heart Award won by Janice White.

The Joint winners of the Youth Development Award were music teacher Hamish Arthur and Zachary Wong from Howick Youth Council. Hamish is the mentor behind the St Andrew’s Big Band, a group he started with the purpose of giving school students the opportunity to continue learning and playing music after leaving school. Zachary has chaired the Howick Youth Council multiple times and continues to mentor and help members develop so they can reach their full potential and continue to help youth have their voices heard in the community.

The Exceptional Artist Award was won by accomplished artist/fabric designer Peter Hall, a Cockle Bay resident who has travelled the world running studios in England and South Africa. His fabrics also feature in the Victoria and Albert Museum in London.